More money for LG reps than for ministers, MPs – President 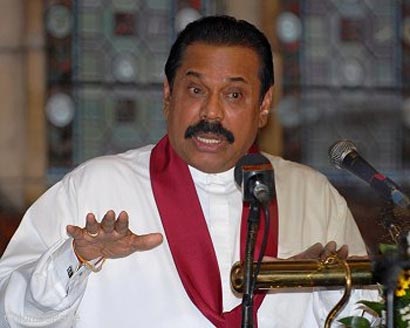 Local Government representatives play a key role in the country’s development. They receive a large amount of money, even more than ministers and Parliamentarians, for development activities, President Mahinda Rajapaksa said.

The President was speaking as the chief guest at the ‘Swarna Purawara’ Awards ceremony and Local Government National Symposium at Temple Trees yesterday. President Rajapaksa said that past leaders of Gam Sabhas were responsible for the village.

”But unfortunately today, though the government allocates money for development of villages, some Local Government representatives don’t use them in a proper way. This should be changed,” he said.

“Local Government representatives only try to save their position and votes due to the preferential vote system.

“The preferential vote system will be changed in the near future. When I was appointed President, the government failed even to elect a Speaker to the Parliament.

“But now we have a two thirds majority in Parliament. Therefore I don’t worry about power, but work hard for the country’s betterment,” he said.

President Rajapaksa said the time has come for all Sri Lankans to live together as children of one mother, after 30 years of conflict.

“Although we represent different political parties, we should not spread hatred and anger among our brethren,” he said.

“Sri Lanka is a country with a long history and a civilization.

“Local Government also has a long history, extending to the period of Sinhala kings, dating back to the fourth century.

“These things are clearly mentioned in our ancient stone inscriptions,” the President said.

7 Responses to More money for LG reps than for ministers, MPs – President