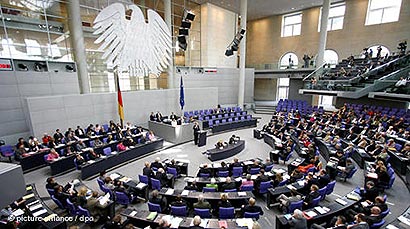 A motion on Sri Lanka titled “Use the UN Human Rights Council and demand Observance of Laws, Human Rights and Reconciliation Process in Sri Lanka“ was rejected with the votes of the governing coalition in the German Bundestag (German Parliament) on 28th February.  The motion put forward by the opposition Social Democratic party (SPD) group in the Parliament and signed its chairman Dr. Frank-Walter Steinmeier, former candidate for German Chancellor and former Federal Minister of Foreign Affairs.

Parliamentarian Jürgen Klimke speaking for the ruling Christian Democratic Party (CDU) party group argued that there is no need for the motion as the Federal Government was already actively working with the international community and the Sri Lankan government to address issues related to it.

Free Democratic Party (FDP) parliamentarian Pascal Kober in his speech said that the FDP-led Federal Ministry for Economic Cooperation and Development and the Federal Government was very active in the promotion of peace and Human Rights in Sri Lanka. “With these activities, this governing coalition supports the long-term process of reconciliation between the formerly conflicting parties in Sri Lanka and thus promotes the step-by-step realization of the Human Rights by the Sri Lankan government,” he said.

Karin Werner, parliamentarian of the Left Party, in her speech referred to the history of the ethnic conflict in Sri Lanka and said that the roots of the conflict had been laid by colonialism.

Tom Koenigs, parliamentarian of Alliance 90 / the Greens and Chairman of the Human Rights Committee of the German Bundestag ( Parliament), in his speech argued that it was in the responsibility of the internationally community to prevent internal conflicts to developing into Human Rights violations. Tom Koenigs further stated that Germany should be the first to contribute for a better protection from gravest Human Rights violations.

The Sri Lankan Embassy in Berlin monitored the proceedings in the German parliament closely.