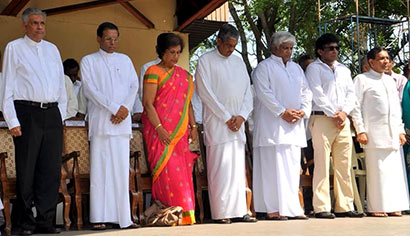 The Memorandum of Understanding (MoU) to field Maithripala Sisirsena as the common Opposition candidate at the forthcoming Presidential Election had been signed by several political parties and civic groups today.

Mr Sirisena who addressed the gathering pledged that he would fulfill the promises and abolish the Executive Presidency and bring about other reforms.
DP leader Sarath Fornseka said he his party was agreeable for more than 80 per cent of the policies of the common candidate and would engage in further discussions with Mr. Sirisena and Mr. Wickremesinghe to reach an agreement.