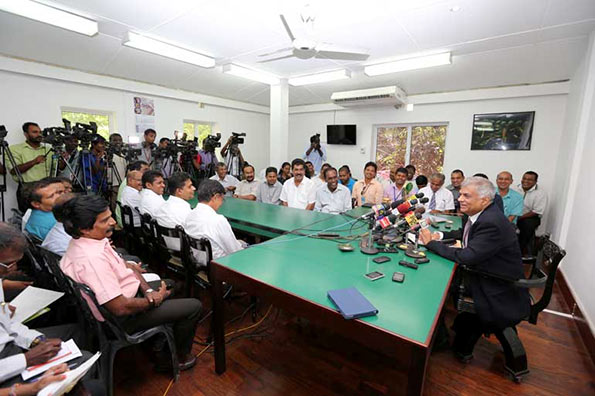 Prime Minister Ranil Wickremesinghe yesterday revealed that former President Mahinda Rajapaksa and his Central Bank Governor Ajith Nivard Cabraal had hidden Rs. 2.7 trillion worth of Treasury Bonds for the benefit of their cronies.

“These Rs. 2,700 billion worth of Treasury Bonds were issued without any transparency. Therefore it is clear that investigating the recent transaction of Rs. 10 billion, corrupt practices which are 270 times more have been discovered. The previous regime has placed these Treasury Bonds with their friends to make major profits,” Wickremesinghe said.

“These transactions have taken place without going through a tender board or public auction system. They are not transparent at all, as they have been done according to the personal preferences of the authorities of the former Government. None of the members who should have been on the tender board had actually been there during those transactions. Treasury Bonds are normal issued by way of a public auction. Instead these bonds have been issued through private placement,” the Premier said.

Wickremesinghe made this disclosure during a meeting with UNP activists at Sirikotha.

He asked the previous Government what had happened to the ill-gotten funds and said that this profiteering by its cronies had resulted in lower salaries for public servants and less relief to the public.

Wickremesinghe also pointed out that it was the Opposition which requested for this investigation but now since so many corrupt dealings of the previous Government had come to light it was requesting them to keep look away from the corrupt dealings that occurred from 2012-2014 and only focus on Central Bank Governor Arjuna Mahendran’s issue.

“The Opposition MPs are today engaged in a battle where thieves are fighting to protect thieves. MPs such as Vasudeva Nanayakkara, G. L. Peiris and Dinesh Gunawardena are involved in this and are responsible for trying to conceal these crimes. Through the CB issue what the Opposition tried to do was prevent us from conducting these internal investigations at the Central Bank. However, along with President Sirisena, all political parties within the country should unite and help purge the nation of corruption,” Wickremesinghe added.

The Prime Minister added that if Mahendran was proven guilty through investigations conducted by the Committee on Public Enterprises (COPE) then the Government would dismiss him from the Central Bank.

Reacting to the torrent of abuse directed at him on Thursday in Parliament by United People’s Freedom Alliance (UPFA) MP Vasudeva Nanayakkara, Prime Minister Ranil Wickremesinghe compared Nanayakkara to a ‘dried pumpkin’ and said that he was no longer in the prime of his life.

“He is a dried pumpkin who has lost the prime of his life. This is how defeated people behave,” the Prime Minister asserted.