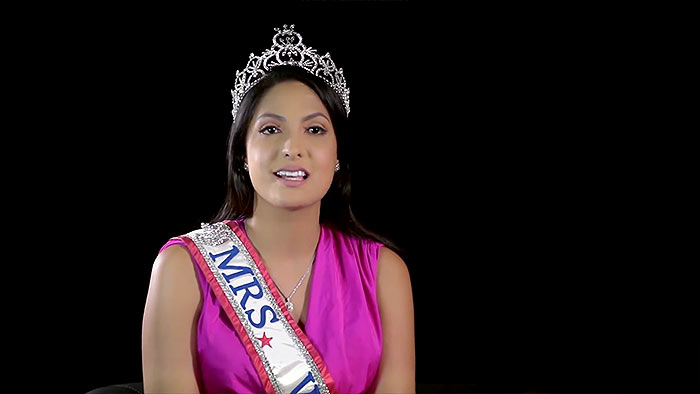 Mrs. World Caroline Jurie, today said she was ready to hand over her crown stating that she stood by her values even if she has to stand alone.

In a video statement, Jurie said as a woman, a mother and the crowned Mrs. World, she was aware that she held a great responsibility towards protecting the image of Sri Lankan women across the world.

Jurie said her only intention was to stand up for the injustice caused to the competitors throughout this competition which she alleged was tainted with heavy politicization. “It upsets me greatly when justice doesn’t prevail. This is why I stood up for injustice, from the beginning of the event, I stood up for what was wrong, but my efforts were futile until the very last moment, which led me to do what I did,” Jurie said.

She said she only stood for what she believed was right and will follow all legal procedures – as a normal Sri Lankan citizen – without influence – while always holding her head up high.

“How I see it, the purpose of Mrs. World is to celebrate all women who are married and still strive to conquer their dreams, despite the commitment and responsibilities a married woman strives to fulfill. Hence the title “Mrs.”. It is her crowning glory that despite all those fulfillments and commitments, she still manages to look after herself and goes out on stage to win a crown… through hard work, meri- tocracy, spirit and purpose. The pageant was certainly not created to discriminate divorced women but to celebrate the dreams of the married women.”

“In the run-up to the Mrs. Sri Lanka event, I saw a lot of commitment and hard work from the competitors. As a mentor, I worked with these beautiful women, imparting everything I have learned along the path I took towards achieving the Mrs. World 2020 title. However, we cannot overlook how there had been corrupt involvement that has been unfair on most contestants that took part and was disrespectful towards the institution I so highly look up to.”

“This year, Sri Lanka will be hosting the Mrs. World finals. When we do, we will be welcoming contenders from all over the world, where Mrs. Sri Lanka too willm compete to win the crown again on the world stage.”

“It is my purpose to mentor and work with Mrs. Sri Lanka and give my best, to see her reach her greatest potential, so that Sri Lanka has a fair chance to win the crown for this country and Mrs. Sri Lanka.”

“As Mrs. World, my purpose is to make sure she has an equal opportunity. This is why I fought for what was right for all the other contestants on the 4th of April, for all of them to have an equal opportunity because
I saw, from the beginning, of how tainted the entire pageant judging was.”

“Even after I hand over the crown, my commitment to my purpose will continue, despite my commitments to my family life. It is not about when I handover the crown, but how I use the crown to serve a greater purpose to the world I live in and represent, as the Mrs. World 2020 title holder.”

“It is unfortunate that I have burst some bubbles, created a conversation and even a debate about class and values that a queen wearing a crown should stand for. If class is defined by how one behaves in the public eye, I will let you draw the conclusions to that. But if class is also defined by how you behave when no one is watching you, and what values you stand by, I believe this is the true test of character.”

“Even if I had to lose class for the values I stand for, I believe I am serving the purpose the Mrs. World crown stands for. Values are deep-rooted. They cannot be measured by outer appearance or monetary value. I believe this is the distinct dierence between Class and Values.”

“I stand for values, even if it means I have to stand alone.”

“We often hope for change. We want to change systems, and to let equality shine through. But we stop at taking action. When we have to stand for something, and even if it means we have to stand alone, we must find the courage to do so.”

“What we fear most are the things we risk losing. If we have to lose something to give an opportunity to another woman to compete on a stage that is equal and fair to all, we must take that stand. After all, one fair chance is all she needs.”

1 Response to Mrs. World Caroline Jurie says ready to hand over her crown