Muslims were living in terror under Rajapaksa regime – Rahman 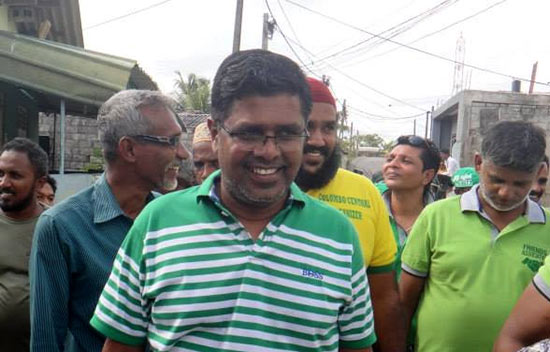 Under Rajapaksa regime, Muslims were living in a reign of terror. They were not sure how many Muslim places of worship would be destroyed and how many Muslim properties would be damaged, UNP MP Mujibur Rahman told Arab News in an interview.

He added that the period after President Sirisena came to power on Jan. 8 was a renaissance to the Muslim community in the island.

He stated that now there is an air of freedom in the community and they can move freely in all parts of the island without being harassed by racists simply because of their religion.

Commenting on the “Ceylon House,” which is a property of the island’s Muslims in Mecca, he claimed that it has to be redeemed from an individual who claims to be its owner and handed to a new group of trustees, who should be appointed by the Colombo government.

Mujibur Rahman, a young parliamentarian who was elected to Sri Lanka’s Parliament with a large number of votes from the Colombo Central Electorate, said that it is sad that the previous government has not taken any action on this matter leaving the public trust in the hands of an individual.

The parliamentarian was on a visit to Makkah to perform Umrah with his wife and two little sons.

“The trustees of the Ceylon House have passed away and the property is now with an individual. We have to take it back (with the help of the heirs of former trustees) and put it under the control of a new group of trustees who should be legally appointed by the Sri Lanka government,” he added.

The Ceylon House, which was given by the Saudi government in place of its old property which was demolished to make way for the new Makkah expansion project, was meant to serve the interests of Haj and Umrah pilgrims from Sri Lanka.

The island’s medical team also utilized it for serving the pilgrims in addition to the poor pilgrims who came from the island, he said.

The new building has 63 rooms on four levels and can accommodate 261 pilgrims. It is located near Hariri Mosque in the university area. The new headquarters was endowed to the Sri Lanka Haj Association by the Makkah governorate.

The individual, whose name is being withheld for obvious reasons, is alleged to have obtained a substantial compensation with the new endowment.

The Sri Lankan Embassy in Riyadh had earlier given the power of attorney to this individual to handle negotiations with the Saudi government on acquiring a new building in place of the old Ceylon House in central Makkah. Consequently, he retains ownership of the property.

“It has traditionally been serving pilgrims with facilities for the Haj medical team, and so we’re keen to see that it’s restored to the community to continue to serve the noble cause,” Mujibur Rahman said.

He added that the original building was purchased for SR115,000 by the Colombo-based Sri Lankan Haj Pilgrims Welfare Trust in 1963. “This came after King Saud in 1960 granted permission to construct housing in Makkah for poor pilgrims from Sri Lanka,” he noted.

Mujibur Rahman said that he will take up this matter with the Ministry of Muslim Afffairs in Colombo headed by Minister M. H. M. Haleem to initiate action in restoring the endowment to the Sri Lankan community.

Arab News has learned that the individual also rents out the building to Pakistani Hajis who come for their annual pilgrimage to the holy city. It is estimated that the seasonal rent would amount to more than SR2 million during the Haj period.

Answering another question on Sri Lankan Muslims, Mujibur Rahman said that the present government under President Maithripala Sirisena with Ranil Wickremesinghe as premier is dedicated to serve the Muslims in all parts of the island, Arab News reports.

Home » Muslims were living in terror under Rajapaksa regime – Rahman