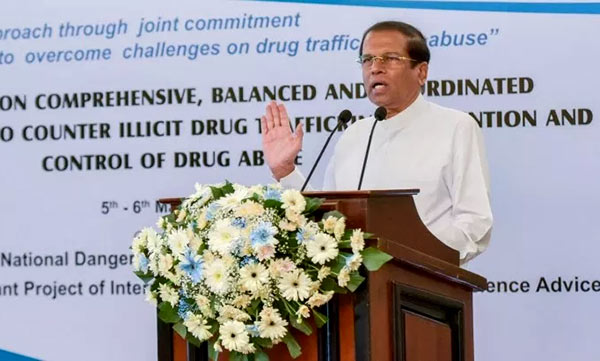 President Maithripala Sirisena said that a new program for eradicating and controlling illicit drugs, which is to be implemented at national level, will be introduced to the country tomorrow (06).

It will be introduced in the meeting with the heads of media organizations scheduled to be held tomorrow (06), according to President’s Media Division.

President Sirisena made these remarks addressing the inaugural ceremony of the Summit of Experts on eradicating illegal drugs-smuggling by using scientific methods held at the Water’s Edge Hotel Battaramulla.

The President further stated that through that new program which will be carried forward with proper coordination with the Tri Forces, Police, Coast Guards, and Customs and it will enable the country and the people to see the new steps taken in the program conducted to eradicate drug smuggling.

While carrying on the new rules and regulations in eradicating drug smuggling certain parties who talk about human rights are creating blockages, the President said and added that if a country is to be virtuous, it has to have policies, visions as well as suitable punishments to culprits. The great historical legacy of our country is written about our valuable society and virtuous culture since punishments and spiritual values have existed hand in hand in the history of the country.

The President also said that the work of the Special Authority established under its guidance for the rehabilitation of drug addicts will commence its work within the next three months.

The Summit of Experts focuses on the use of broadly and coordinated scientific methods for the elimination and prevention of illegal drug trafficking.

Scientists, intellectuals and policymakers from different countries are participating in this summit and the National Dangerous Drugs Control Board is organizing the summit, which will continue tomorrow.

The President further advised the Chairman of the Dangerous Drugs Control Board to inform him of all decisions taken at this conference.

President Sirisena said that the Government of Sri Lanka is fully committed to implementing the national programs and sought advice and guidance from academics, experts and industry experts.