Boosts and bumpers in Budget 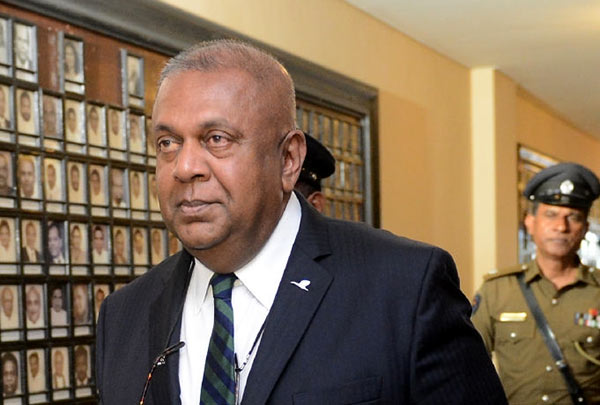 True to expectations, Finance Minister Mangala Samaraweera yesterday presented a people-friendly Budget for 2019, balanced with maintaining policy consistency and reforms for the private sector, though the Opposition and some analysts were wary.

A segment of Samaraweera’s proposals were targeted at increasing economic competitiveness, while others were focused on providing voter incentives for an election year, and revenue-generating measures. The Budget for 2019 was titled “Enterprise Sri Lanka -Empowering the People and Nurturing the Poor.”

Predictably, the Government increased the salaries of public sector workers, by giving an interim allowance of Rs. 2,500 per month from 1 July. Payments to a range of social segments, including the elderly, armed forces, differently-abled, and Samurdi beneficiaries, were also listed out. A significant segment of the Budget was also dedicated to policies aimed at increasing women’s participation in the formal workforce, and encouraging entrepreneurship.

Budget 2019 also raised production tax on cigarettes by Rs.5 per stick, production tax on hard liquor 750 ml by Rs.63, and a beer can by Rs.9. Given the high debt repayments in 2019, and moderate reserve levels, the Government opted on the side of caution and increased costs on small vehicles, deviating from the usual practice of reducing prices during election years. Accordingly, production tax on vehicles less than 1000cc has been increased by Rs.175,000, and for less than 1300cc by Rs.500,000.

Production taxes on electric vehicles less than 70KW will be reduced by Rs.175,000. Three-wheelers of 200cc will see their production tax increased by Rs.60,000.

The core of the Budget was focused on measures to increase exports, attract investment, promote key industries such as tourism, and improve skill levels of the workforce. However, Samaraweera had tough words for the private sector at the start of his speech, insisting that the Government was on the side of companies that were willing to be competitive.

“This Government believes in growth led by private enterprise. However, by private enterprise, what I mean is the genuine entrepreneur who uses his ingenuity to compete in a fair market, the small and mid-size businesses that embody the spirit of Sri Lankan trade and commerce, and the Sri Lankan companies that compete on the global stage and win,” he said.

“There is also the other segment of the private sector, which is averse to competition and fair markets. The beneficiaries of a crony capitalism that thrived in a kleptocracy, which enriched those connected to the previous regime. These companies grew rich on the rents from walls of tariff, protection by driving up costs for 20 million citizens. They benefited from inflated Government contracts, the costs of which are still being paid-off today.”

Samaraweera went onto say that these local “oligarchs” wished to see a return of the previous Government, but that his focus was to promote economic liberalisation, buttressed by a robust safety net, and State intervention to address market failures and ensure social justice.

“Some of these oligarchs yearn for the return of a dictatorship, which funnelled so much wealth into their companies and private accounts. This is a small but powerful and influential segment of the private sector. This is not the private sector that we want to see as the engine of economic growth, but is a vestige of a bygone era.”

“We are creating a new breed of private enterprise, where success is through merit, and the market operates on a rules-based level playing field. Sri Lanka needs a private sector free from the protectionist mindset that continues to hold back our country’s development and modernisation. We will continue this framework and strengthen its key elements. Our determination to pursue a liberal, outward-oriented economy is more steadfast than ever. Towards this end, we are continuing the phasing-out of para-tariffs and reducing barriers to trade. At the same time, we have built in safeguards with the passage of anti-dumping legislation, and the creation of a Trade Adjustment Program, to support firms and workers, in meeting the challenges of competition,” he added.

Samaraweera kicked off with the key Gamperaliya program, which has been allocated Rs.48 billion in 2019, and a proposal to establish a fund under the Central Bank to provide guarantees to the SME Sector under the Enterprise Sri Lanka program.Businesses that obtain Enterprise Sri Lanka loans will also be linked with Government institutions such as ITI, ICTA, EDB, and the universities, to create a larger eco-system. Budget 2019 also proposed that 10% of State procurement be earmarked for SMEs.

Rs.1 billion has been allocated to the primary school children’s nutrition effort, by providing a free glass of milk to students in all rural schools in the country. The Finance Minister pointed out that even though Sri Lanka is a low middle income country, there are an estimated Rs. 260,000 houses without sanitary facilities. Therefore the Government would allocate Rs.4 billion for construction of sanitary facilities in houses, and a further Rs.1 billion to build toilets in bus and railway stations.

“I encourage commercial establishments with more than 250 employees to provide child-care facilities. Also, selected schools will be supported to establish After-School and Vacation Centres (ACVC) within the school itself, while the private sector will also be facilitated to establish child-care facilities, through the “Rekawarana” Concessionary Loan Schemes of “Enterprise Sri Lanka.”

“At present, differently-abled individuals are paid an allowance of Rs.3,000/- per month. Whilst increasing the allowance to Rs.5,000/- per month, we will expand funding to accommodate almost all the 72,000 eligible low-income individuals. Rs.4,320 million has been allocated for this. This allocation will enable us to eliminate the waiting list,” he said. Rs.1.8 billion has been allocated to pay Rs.5000 per month to 26,000 patients suffering from chronic kidney disease.

“Our strategy has also been to address the issue of providing better housing for, specially the most vulnerable sectors of the society, including the low income groups in Urban, Rural and Estate sectors and the North and the East, mainly through the Urban Re-generation Project (URP) and Model Village Program, for which Rs.24,500 million has already been allocated in 2019.”

To support, especially the middle-income first-time home buyers, the Government will launch a concessionary loan up to Rs. 10 million, at a 6% interest rate with a repayment period of 25 years called “Home Sweet Home” Loan. This will be for young couples buying or building their first home. This “Enterprise Sri Lanka” loan scheme will be extended to also purchase mid-range apartments and houses built by private entities.

As part of the Government’s strategy to phase out para-tariffs this process will continue in 2019, where all HS codes with an import Cess will be subject to a phasing-out. The Budget has also proposed that the para-tariff phase-out takes place over a 5 year period.

“I propose to reduce the Ports and Airport Development Levy for machinery and equipment items (HS Code Chapters 84 and 85) to a maximum of 2.5%. I also propose an accelerated Cess reduction program for intermediate goods that drive up costs in sectors such as, the Construction Sector, Tourism, and Manufacturing. These items will have Cess phased-out over a 3 year period.”

The Government would also implement the Trade Adjustment Program (TAP), which has been under discussion since 2016 and keep 10% on sensitive HS codes to protect some local producers. Rs.500 million is to be allocated over two years for TAP.

Budget 2019 also proposed an incentive package to attract high value investments. This includes significant capital allowances of up to 150% of investment value, and removal of up-front taxes for investments over $50 million, $100 million and$1,000 million.

“Subsequent to consultations with the private sector, we propose to make some adjustments to the Inland Revenue Act to facilitate implementation and address some pertinent concerns of industry.”

A Revenue Intelligence Unit will be established at the Ministry of Finance, to take steps to assist the main Revenue Collection Departments, such as Customs, Inland Revenue and Excise, to broaden their revenue collection bases, increase total revenue collected and minimise leakages and evasion. Customs will launch the Authorised Economic Operators (AEO) Program in 2019, which will provide expedited clearance for identified low risk traders and clearing agents.

The Gem and Jewellery Industry will be supported with the PAL and Customs Duty on the importation of machinery used in lapidaries, and the PAL on the un-cut gems imported will be reduced from 7.5% to 2.5%.

In the tourism sector, Nation Building Tax (NBT) on foreign currency receipts by tourist hotels registered by the Sri Lanka Tourism Development Authority (SLTDA) will be removed. It is proposed to make it mandatory for travel agents to remit funds to hotels in US Dollars when invoiced in US Dollars. The Central Bank will issue directions in this regard.

“From 1 April 2020, any online booking/reservation website can register hotels and similar establishments offering more than 5 rooms per property only if such establishments are registered with the Sri Lanka Tourism Development Authority (SLTDA). The registration process of the SLTDA will be further simplified to facilitate this. Cess on selected items for the refurbishment of hotels will also be reduced.”

A Scholarship for Educational Excellence (SEE Fund) will be established to send the top performers of the Advanced Level exam to top foreign universities, such as Harvard, MIT and Oxford. The Rs.200 million program will be started this year. Rs.25 billion will be allocated to bridge infrastructure shortages in universities, as well as Rs.200 million to a student loan scheme for students who have completed their Advanced Level exams, to get interest-free loans up to Rs.1.1 million.

“Ran Mawath”program of Rs.10 billion to construct and maintain rural roads has been outlined in the Budget. The private sector is to be allowed to rent or lease railway carriages in the four main lines. Rs.12 billion has been allocated for pension revisions and ironing out pension anomalies. Rs.1.1 billion was also allocated to increase allowances for the armed forces.

“I propose to develop an objective, transparent and measurable criteria, to streamline the “Samurdhi”Program in a more effective manner, which will actually facilitate the addition of around 600,000 deserving households. Rs.10,000millionhasbeen allocated for this. Many deserving families have been left out,merely because of their loyalty to other political parties.”

Some private sector analysts opined there were no surprises but it was a populist and election Budget success of which largely hinges on implementation a factor that Yahapalanaya regime has lagged.

All leading Chambers of Commerce and Industry are expected to make known their views on 2019 Budget today or tomorrow after a thorough study.

1 Response to Boosts and bumpers in Budget

Home » Boosts and bumpers in Budget