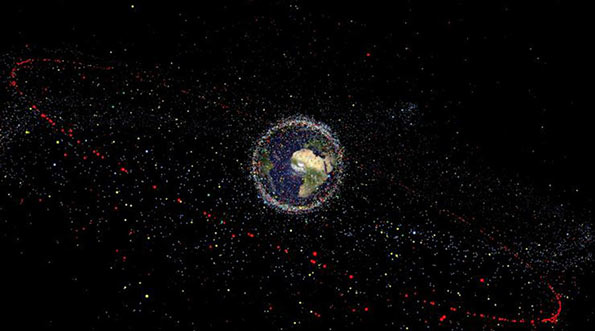 A mysterious chunk of space debris will hit Earth off the coast of Sri Lanka on November 13.

The object, dubbed WTF1190F, is set to land in the Indian Ocean, around 40 miles (65km) off the southern tip of Sri Lanka, at 6:20 UTC on 13 November, the Daily Mail news agency reported.

It measures up to 7ft (2 metres) long and it could be a piece of rocket stage from a recent lunar mission, or even part of an Apollo program craft that has been in space for more than 40 years.

The unknown object was rediscovered by astronomers at the Catalina Sky Survey, based at the University of Arizona earlier this month.

Astronomers at the European Space Agency’s (Esa) Near Earth Object office in Noordwijk, the Netherlands, are now monitoring the space junk’s journey carefully.

It is also being used to test plans put in place to monitor potentially dangerous space objects hurtling towards Earth.

The agency said that WT1190F ‘poses very little risk to anyone but could help scientists improve our understanding of how any object – man-made or natural – interacts with Earth’s atmosphere.’

Bill Gray, an independent astronomy software developer who has been tracking the debris with Nasa’s Jet propulsion Laboratory in Pasadena, California, told Nature the space junk was travelling in an elliptical orbit, that at its longest point, is twice as long as the distance between Earth and the moon.

The way it moves also suggests the object is hollow inside.

It’s not known how many pieces of space junk orbit the Earth and moon, but WT1190F is rare.

It is believed to be one of only 20 or so man-made objects tracked in distant orbit, according to Gareth Williams, an astronomer at the Minor Planet Centre in Cambridge, Massachusetts.

And it’s not known exactly how the object was propelled onto a collision-course with Earth.

Jonathan McDowell, an astrophysicist at the Harvard-Smithsonian Centre for Astrophysics in Cambridge, Massachusetts, said WTF1190F is probably ‘a lost piece of space history that’s come back to haunt us’.

While it is more likely the junk dates from recent years, it could be a piece of from an Apollo Mission, over 40 years ago.

A piece of the Saturn V rocket, which enabled man to first walk on the moon, was spotted orbiting Earth in 2002.

If WTF1190F is a piece of rocket it will be the first piece of man-made junk to return home independently.

Mr Gray predicts most of it should burn up upon entering the atmosphere, so it will not create a terrifying tidalwave or crater as seen in disaster films.

But despite this, he said: ‘I would not necessarily want to be going fishing directly underneath it.’

Experts predict most of it should burn up upon entering the atmosphere, so it will not create a terrifying tidalwave or crater as seen in disaster films.