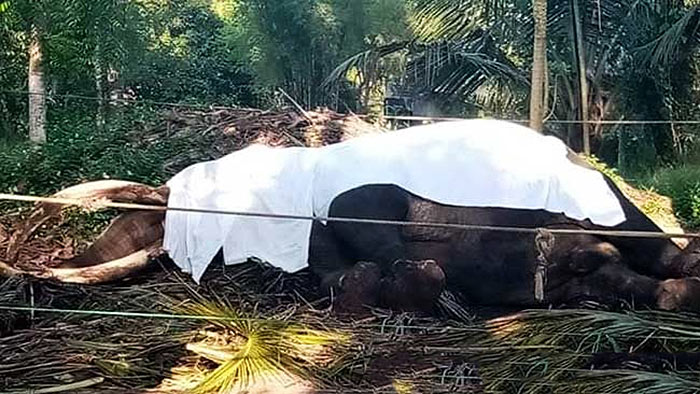 Nadungamuwa Vijaya Raja, popularly known as Nadungamuwa Raja passed away this morning (March 07) at the age of 69, the caretaker of the elephant Harsha Dharmawijeya said.

He said the elephant died at 5.30 am today following a brief illness.

Nadungamuwa Raja, was a celebrated elephant towering around 10.5 feet (3.2 meters) in height, the tallest tamed tusker in Sri Lanka and the tusker who carried the Sacred Casket of Buddha Relics at the annual Kandy Perahera for the most number of times.

“The majestic animal did not have any previous illness, but it did not take any food yesterday and breathed for the last time,” he said.

Nadungamuwa Raja was one of the most protected tuskers in Sri Lanka, having his own security details when traveling to the Temple of the Sacred Tooth Relic in Kandy.

There are two regular handlers with Raja in addition to the military unit deployed to clear a path for the animal when it navigates crowded country roads.

Raja is a national treasure because he is one of the few tuskers chosen to carry a casket of Lord Buddha’s relics in an annual pageant at the most sacred Buddhist shrine on the island, the Temple of the Tooth.

Nadungamuwa Raja has carried the main casket for 13 years and is considered a national treasure.

The elephant’s death was informed to the wildlife department, since the elephant was a property of the government, Dharmawijeya said.

The burial date will be announced after inspection by wildlife officials, the caretaker said.