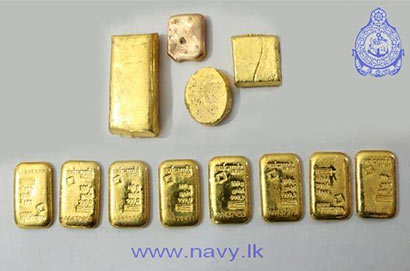 Navy seized a haul of 1.730 kilogrammes of gold which was hidden inside a fiber glass dingy on the beach in the Madagalthurei area of Kankasanthurai (KKS) yesterday.

Navy spokesman Commander Kosala Warnakulasuriya said it was suspected that the gold, comprising eight gold biscuits and four gold pieces had been kept concealed under the fishing nets in order to be smuggled to India.

The seized gold was to be handed over to the Customs officials for further investigations.

Investigations were underway to arrest the suspects involved in the racket.