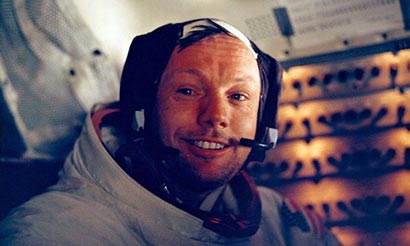 US astronaut Neil Armstrong, who took a giant leap for mankind when he became the first person to walk on the moon, has died at the age of 82, his family said on Saturday.

Armstrong died following complications from heart-bypass surgery he underwent earlier this month, the family said in a statement, just two days after his birthday on August 5.

As commander of the Apollo 11 mission, Armstrong became the first human to set foot on the moon on July 20 1969. As he stepped on the dusty surface, Armstrong said: ““That’s one small step for [a] man, one giant leap for mankind.”

Those words endure as one of the best known quotes in the English language.

The Apollo 11 astronauts’ euphoric moonwalk provided Americans with a sense of achievement in the space race with Cold War foe the Soviet Union and while Washington was engaged in a bloody war with the communists in Vietnam.

Neil Alden Armstrong was 38 years old at the time and even though he had fulfilled one of mankind’s age-old quests that placed him at the pinnacle of human achievement, he did not revel in his accomplishment. He even seemed frustrated by the acclaim it brought.

“I guess we all like to be recognised not for one piece of fireworks but for the ledger of our daily work,” Armstrong said in an interview on CBS’s 60 Minutes programme in 2005.

He once was asked how he felt knowing his footprints would likely stay on the moon’s surface for thousands of years. “I kind of hope that somebody goes up there one of these days and cleans them up,” he said.

James Hansen, author of First Man: The Life of Neil A. Armstrong, told CBS: “All of the attention that … the public put on stepping down that ladder on to the surface itself, Neil never could really understand why there was so much focus on that.”

The Apollo 11 moon mission turned out to be Armstrong’s last space flight. The next year he was appointed to a desk job, being named Nasa’s deputy associate administrator for aeronautics in the office of advanced research and technology.

Armstrong’s post-Nasa life was a very private one. He took no major role in ceremonies marking the 25th anniversary of the moon landing. “He’s a recluse’s recluse,” said Dave Garrett, a former Nasa spokesperson.

Born on August 5 1930, in Wapakoneta, Ohio, Armstrong was the first of three children of Stephen and Viola Armstrong. He married his college sweetheart, Janet Shearon, in 1956. They were divorced in 1994, when he married Carol Knight.

Armstrong had his first joyride in a plane at age six. Growing up in Ohio, he began making model planes and by his early teens had amassed an extensive aviation library. With money earned from odd jobs, he took flying lessons and obtained his pilot’s license even before he got a car license.

In high school he excelled in science and mathematics and won a US Navy scholarship to Purdue University in Indiana, enrolling in 1947. He left after two years to become a Navy pilot, flying combat missions in the Korean War and winning three medals.

After the war he returned to Purdue and graduated in 1955 with an aeronautical engineering degree. He joined the National Advisory Committee on Aeronautics (Naca), which became Nasa in 1958.

Armstrong spent seven years at Naca’s high-speed flight station at Edwards Air Force Base in California, becoming one of the world’s best test pilots. He flew the X-15 rocket plane to the edge of space—61 000m at 6 435km/h.

On the Gemini 8 mission, Armstrong and fellow astronaut David Scott performed the first successful docking of a manned spacecraft with another space vehicle.

Armstrong put his piloting skills to good use on the moon landing, overriding the automatic pilot so he and fellow astronaut Edwin “Buzz” Aldrin would not have to land their module in a big rocky crater.

Yet the landing was not without danger. The lander had only about 30 seconds of fuel left when Armstrong put it down in an area known as the Sea of Tranquility and calmly radioed back to Mission Control on Earth, “Houston, Tranquility Base here. The Eagle has landed.”

Aldrin, who along with Armstrong and Michael Collins formed the Apollo 11 crew, told BBC radio that he would remember Armstrong as “a very capable commander and leader of an achievement that will be recognised until man sets foot on the planet Mars.”

Armstrong left the National Aeronautics and Space Administration a year after Apollo 11 to become a professor of engineering at the University of Cincinnati.

Declines to run for office

After his aeronautical career, Armstrong was approached by political groups, but unlike former astronauts John Glenn and Harrison Schmitt who became US senators, he declined all offers.

In 1986, he served on a presidential commission that investigated the explosion that destroyed the space shuttle Challenger, killing its crew of seven shortly after launch from Cape Canaveral in January of that year.

Armstrong made a rare public appearance several years ago when he testified to a congressional hearing against President Barack Obama administration’s plans to buy rides from other countries and corporations to ferry US astronauts to and from the International Space Station.

Armstrong also said that returning humans to the moon was not only desirable, but necessary for future exploration—even though Nasa says it is no longer a priority.

He lived in the Cincinnati area with his wife, Carol.

“We are heartbroken to share the news that Neil Armstrong has passed away,” the family said in their statement. “Neil was our loving husband, father, grandfather, brother and friend.”

His family expressed hope that young people around the world would be inspired by Armstrong’s feat to push boundaries and serve a cause greater than themselves.

“The next time you walk outside on a clear night and see the moon smiling down at you, think of Neil Armstrong and give him a wink,” the family said.

Obama said that Armstrong “was among the greatest of American heroes—not just of his time, but of all time. …

“Today, Neil’s spirit of discovery lives on in all the men and women who have devoted their lives to exploring the unknown—including those who are ensuring that we reach higher and go further in space. That legacy will endure—sparked by a man who taught us the enormous power of one small step.”

Glenn, an original Nasa astronaut with Armstrong, spoke of his colleague’s humble nature. “He was willing to dare greatly for his country and he was proud to do that and yet remained the same humble person he’d always been,” he told CNN on Saturday.

The space agency sent out a brief statement in the wake of the news, saying it “offers its condolences on today’s passing of Neil Armstrong, former test pilot, astronaut and the first man on the moon.”

Armstrong is survived by his two sons, a stepson and stepdaughter, 10 grandchildren, a brother and a sister, Nasa said.

Some controversy still surrounds his famous quote. The live broadcast did not have the “a” in “one small step for a man …” He and Nasa insisted static had obscured the “a,” but after repeated playbacks, he admitted he may have dropped the letter and expressed a preference that quotations include the “a” in parentheses.

Asked to describe what it was like to stand on the moon, he told CBS:

“It’s an interesting place to be. I recommend it.” – Reuters 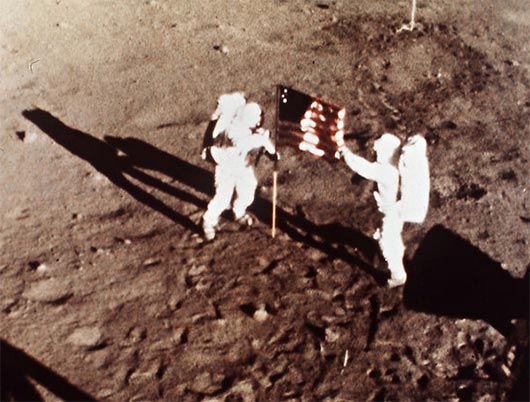