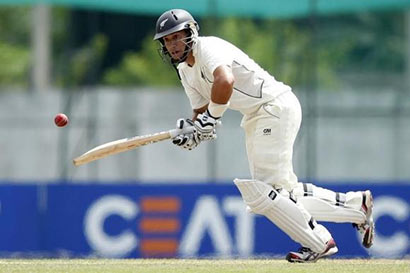 Kane Williamson and Ross Taylor calmly guided New Zealand to an eight-wicket victory over Sri Lanka in the first test at Hagley Oval in Christchurch on Monday.

Williamson was on 31 and Taylor 39 as the hosts made 107-2 to seal the win on the fourth day having suffered some uneasy moments with Tom Latham (17) and Hamish Rutherford (10) dismissed before tea as New Zealand chased down their victory target of 105 runs.

Taylor hit an off drive from Dhammika Prasad’s bowling for his sixth boundary to win the game.

Sri Lanka had been bowled out for 407 in their second innings in an extended first session before lunch after Tim Southee took three quick wickets in the first hour of play.

However, a 59-run final wicket partnership between Eranga (45 not out) and Suranga Lakmal (16) frustrated New Zealand’s bowlers and extended the session past the normal lunch break.

Southee finished with 4-91 from 37 overs while Trent Boult took 4-100 from 39 and the pair will relish the extra day’s rest before the second test begins in Wellington on Saturday.

New Zealand’s bowlers had been in the field for more than 196 overs after the follow-on was enforced by Brendon McCullum on Saturday when they dismissed the visitors for 138 in their first innings.

McCullum’s brilliant innings of 195 on the first day defined the match, with the New Zealand captain belting 18 boundaries and 11 sixes in his 134-ball knock as his side raced to 441 in 85.5 overs.

His pace bowlers then destroyed Sri Lanka’s first innings with the new ball pairing of Boult and Southee particularly impressive with their line, length and ability to get seam and swing.

Sri Lanka, who had entered the game with little match practise in New Zealand conditions, acquitted themselves better in their second innings with opener Dimuth Karunaratane notching his maiden test century, scoring 152 from 363 deliveries.

The second match of the two-test series is at Wellington’s Basin Reserve from Jan. 3-7.