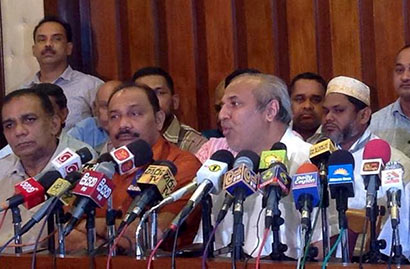 SLMC Leader Rauff Hakeem, who held the Justice portfolio in President Rajapaksa’s Cabinet, said he had resigned as minister.

Speaking at a press briefing at the SLMC Headquarters Darusalaam last morning, Hakeem said that “good governance” was a key issue for the Muslim party.
“The popular wish among many people in the country, not simply the Muslims, is to see a reversal in the current state of affairs. Therefore we have unitedly resolved to support the candidature of Mr. Maithripala Sirisena,” the SLMC Leader said.

“We were compliant in allowing President Rajapaksa to contest a third term through the 18th Amendment,” Hakeem told journalists. “But on the eve of its presentation in Parliament, very surreptitiously, very valuable features of the 17th Amendment had been taken away. And it had become fait accompli to get the SLMC to support the amendment,” he said.

Referring to the repeal of the 17th Amendment as a tragedy and crime, Hakeem said his party was quitting the Government and supporting the opposition candidate to “correct those mistakes.”

“Those features and the resultant effect also had the impact of the unnecessary consequences the Muslim community had to face that is making them feel betrayed,” the former Justice Minister charged.

He said that in order to restore good governance and the rule of law, the SLMC would work towards the victory of common candidate Maithripala Sirisena and sign an agreement with the main Opposition United National Party.

The SLMC Leader said the party had taken over a month to make a decision about which candidate to endorse at the 8 January election. “There were a few disagreements but ultimately we were all united,” Hakeem explained.

The party met on Saturday evening for a last round of discussions, which followed another brief meeting early yesterday before the official announcement was made, Daily FT learns.

Hakeem said that Minister of Economic Development Basil Rajapaksa had visited him at his home for discussions on the eve of the SLMC announcement.
The SLMC Leader said he had also held discussions with SLFP senior members and Defence Secretary Gotabaya Rajapaksa about the problems facing the Muslim community before his decision.

With the SLMC’s exit from the ruling coalition, the UPFA has effectively lost control of the Eastern Provincial Council, but Hakeem said he does not foresee “unnecessary turbulence” in the council as a result of the party’s decision to quit the Government.

“Of course our ministers are resigning in keeping with our decision to back the common opposition candidate,” he explained.

The exit of the country’s main Muslim party further erodes the incumbent’s chances of securing the minority vote at the 8 January presidential contest, which political analysts claim he is already struggling with.

After Bathiudeen’s exit the Eurasia Group said the common opposition presidential candidate Maithripala Sirisena was likely to «narrowly win» but that a desperate Rajapakse administration could still try to remain in power.

The Sri Lanka Muslim Congress may have been forced into a decision to withdraw support from the UPFA after Bathiudeen’s decision, sources from the party told Daily FT. Hakeem was initially mulling staying neutral at the election, after quitting his portfolio, highly-placed sources told Daily FT.
However, Bathiudeen’s hero’s welcome in Kattankudy in the Eastern Province this week, suggested SLMC reticence may result in the ACMC winning over its base, the sources added.

The Muslim parties have also been spurred into action by the hardline Bodu Bala Sena’s open endorsement of President Rajapaksa for re-election, the sources said. Last week the BBS, which has been accused of inciting violence against the Muslim community, announced that it had instructed its organisation network to work towards President Rajapaksa’s victory.

With the exit of the SLMC, the Government is now well short of a two-thirds majority in Parliament, with 143 members sitting in ruling party ranks. Since President Rajapaksa announced snap polls on 20 November, his ruling coalition has lost a total of 23 members. Two MPs from the opposition, Tissa Attanayake and Jayantha Ketagoda realigned themselves with the Government.