No decision should be taken outside the constitution – Maha Sangha emphasise 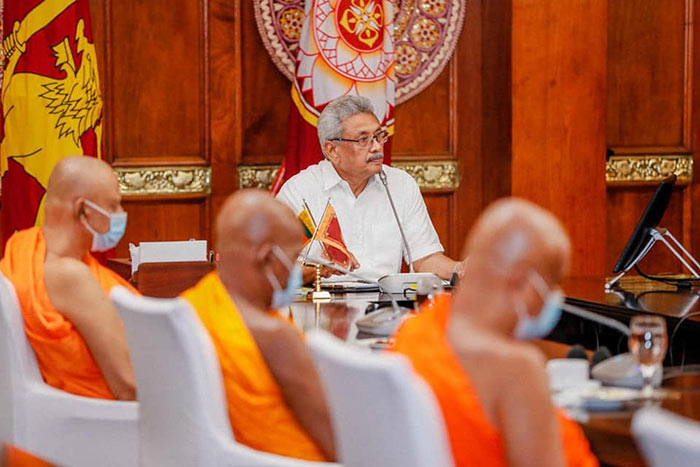 President Gotabaya Rajapaksa enlightened the Maha Sangha on the measures taken by the Government to control the spread of COVID-19 virus and their progress during a meeting held at the Presidential Secretariat yesterday (24).

President explained about the control of the spread, quarantine process, reliefs granted to people and future measures to revive the national economy.

The support rendered by every segment of the society including health, security and the entire state mechanism in the face of current challenges is enormous, President said.

President stressing the necessity of a strong Parliament to fulfil the aspirations of the people bestowed on him with the landslide victory said that there are no Constitutional powers to reconvene the old Parliament but to convene a new one.

President said that he expects to meet Maha Sangha regularly on 3rd Friday of every month and expressed his anticipation of blessings and guidance of Maha Sangha as he stated in front of Ruwanweli Seya and during the assumption of office.

Nayaka Theros of all three Chapters said that they approve the conduct of the President and the Government.

Stating that the country should not be put in jeopardy by reconvening the old Parliament Maha Sangha unanimously agreed with the decision not to convene the dissolved legislature.

Ven. Niyangoda Vijithasiri Thero said the previous Parliament should take the responsibility for the current financial crisis in the country.

Ven. Thrikunamale Ananda Thero, the Maha Nayaka of the Amarapura Sri Dharmarakshitha Chapter said that when looking at the initiatives taken by the President to prevent the spread of coronavirus as well as for the future, it is clear that there is a new vision being implemented in the country.

Ven. Prof. Medagoda Abayathissa Thero was of the view that the measures implemented by the President to prevent the spread of the coronavirus could be an example for other countries in the world. The young generation of the country and other various groups have invented many new products. ‘This is a golden opportunity for a better future’, the Thero further said. He also said that the Maha Sangha of the country will always support the steps being taken by the President.

Ven. Dr. Diviyagala Yasassi Thero and Ven. Prof. TubulleSeelakkanada Thero pointed out the importance of creating an environment to celebrate the Vesak festival using electronic media while remaining at homes. It was decided to appoint a Committee in this regard.

Maha Nayaka of the Asgiriya Chapter Most Ven. Wendaruwe Upali Thero said that the steps taken by the President to feed the hungry including the beggars are commendable.