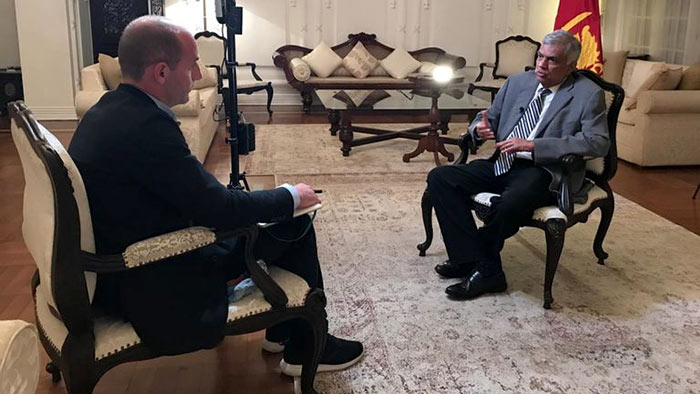 Prime Minister Ranil Wickremesinghe has admitted to the failure of the government to ensure the country’s security.

In an interview with Sky News Prime Minister Wickremesinghe claimed this was due to a “breakdown in government machinery” and intelligence not being passed on to either himself or Ministers.

Prime Minister Ranil Wickremesinghe admitted intelligence agencies had information that could have stopped the attacks if it had been passed on correctly.

He said there was a “breakdown of communication”.

he Premier said “If we had known the information and we had not acted then I would certainly say the government had to be held responsible and [should] leave office, adding there were “probably” some links between the attackers and Islamic State and it was likely the bombers had international assistance.

Fresh details have emerged about Abdul Lathief Jameel Mohamed, a former UK student who is suspected of carrying out a suicide bombing in Dehiwela.

New CCTV images have emerged showing Mohamed outside an inn in Dehiwala before detonating his device on Easter Sunday.

The Prime Minister said Mohamed had been monitored by Sri Lankan police but, although they found him to be “extremist”, they found no evidence of “violent” attacks.

Prime Minister Wickremesinghe said authorities are now looking at whether Mohamed had travelled to Syria, as some others had between 2016 and 2017.

The Premier admitted his country was unable to act against those who travelled to Syria because there is no law in Sri Lanka against joining a foreign terror group.

Prime Minister Wickremesinghe said his government would change the law to address this.

Eight of the suicide bombers have been identified, with State Minister of Defence Ruwan Wijewardene saying they were well educated and from wealthy families.

On Tuesday, Islamic State said it carried out the attacks before publishing images of the group’s leader, Zahran Hashmi, pledging loyalty to IS leader Abu Bakr al Baghdadi.