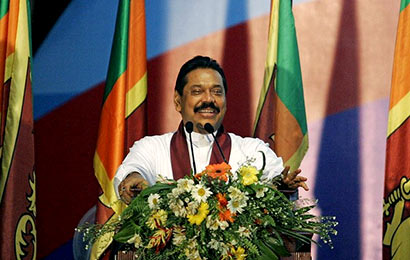 “In my Cabinet there are no Ministers who can be bought with dollars or pounds. The West is keen to see that the country is run by a spineless leader who is ready to dance to their tune. Certain countries want to create a puppet regime here. But, I must say that our people are not ready to elect such a person as their leader to run the affairs of this country.” “I will win this Presidential election. No one is a challenge to me and I am confident of winning, no matter who comes from the Opposition,said President Mahinda Rajapaksa.

The President said there are rumours to say that he would be dragged to The Hague to be tried before the International Court of Justice. The Al Jezeera TV station had reported it.

He also said that those who cannot take criticism kill those who criticize them like they did to Richard de Soyza and the Dehiwala Municipal Council member who was shot by unknown gunman. Any one can produce a drama against me and I have the guts to enjoy it, unlike the leaders of the past.

Some Sunday newspapers are very critical of me and the very same newspapers say that there is no freedom,” President added.

“Crossovers from one political party to another is very common and there is nothing surprising about it.

We all know what happened to those who left the Sri Lanka Freedom Party in the past,” the President said.