No need to be afraid of Gota: Basil 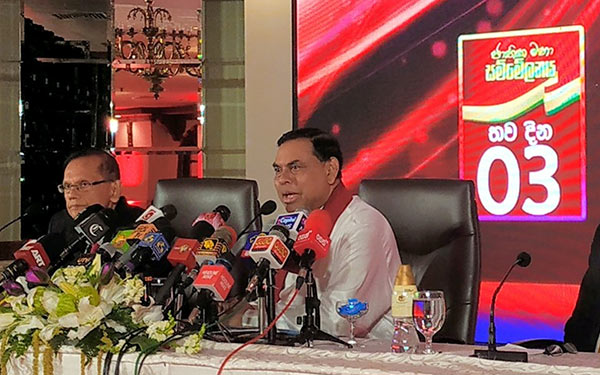 Mr. Gotabaya Rajapaksa is widely speculated to be the presidential candidate of the SLPP.

Mr.Rajapaksa said this in response to a question at a news briefing held in Colombo to announce the party’s national convention on Sunday.

When asked about fears some people have of Gotabaya Rajapaksa, he said, “No need to be afraid of him.”

However, he neither denied nor accepted that Gotabaya would be named as the SLPP presidential candidate at the party’s national convention to be held on Sunday 11th.

“At the convention, former President Mahinda Rajapaksa would be appointed as our party leader officially. As the party leader, he will definitely announce our presidential candidate. We have requested to name someone who is technology savvy, preserves democratic values and can govern the country well. On the one hand he has to be like a terminator to eradicate fraud and corruption, and on the other hand he should be able to ensure security to people,” he said.

When asked whether he thought Gotabaya had these qualities, Mr.Rajapaksa said, “I personally think he has these qualities but there can be others former President Rajapaksa likes as well. He is aware of the people’s choice. I’m not going to take away his right to name the candidate. We will select someone good,” he said.

Commenting on a future government they will establish, he said their government would be based on democratic values.

“We have to introduce technology to develop the country. We will strengthen our international relationships. In fact, we are ready by now to face the Commonwealth summit to be held in Rwanda as well as the next UNHRC session in Geneva in March,” he said.

He said the national convention was a SLPP matter and that they have decided not to invite the SLFP as a party out of goodwill.

“We invited all MPs in the opposition who follow Opposition Leader Mahinda Rajapaksa. We didn’t invite the SLFP as a party, because of the on-going talks with them,” he said.

When asked what option the SLPP would have in the event it formed an alliance with the SLFP and the latter opposed to the SLPP presidential candidate, he said, “Then there will be no alliance.”

5 Responses to No need to be afraid of Gota: Basil

Home » No need to be afraid of Gota: Basil