No nominations for Duminda, Mervyn, Sajin and Sarana 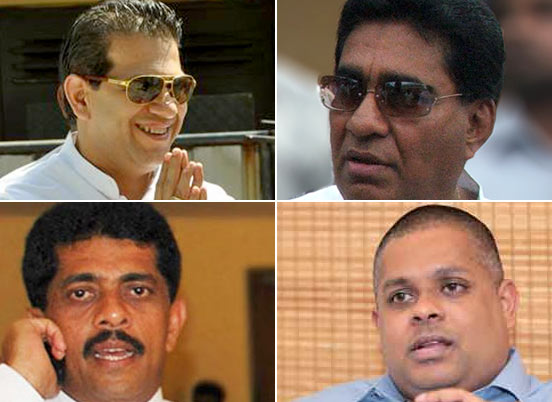 The nomination boards of the SLFP and the UPFA have agreed not to give nominations to former MPs Duminda Silva, Mervyn Silva, Sajin de Vass Gunawardena and Sarana Gunawardena to contest the forthcoming general Election, political sources said.

A special discussion was held last night, at the residence of a prominent minister, to prepare the final nominations list of the United People’s Freedom Alliance (UPFA) and its main constituent party – the Sri Lanka Freedom Party (SLFP).

The discussion had dragged on past midnight yesterday while emphasis was mainly given to four points when affording nominations with priority given to ruling out individuals who have been charged with corruption.

Therefore both parties had agreed on not giving nominations to the aforementioned politicians, even before the discussion had commenced.

Meanwhile attention had also been directed towards 10 other ex-Parliamentarians, who have been charged with allegations of corruption.

Hence there is an uncertainty as to whether these individuals will be provided nominations to contest the polls, source told Ada Derana.

The UPFA and SLFP nomination lists prepared so far are expected to reach President Maithripala Sirisena today before the parties come to a final agreement.

4 Responses to No nominations for Duminda, Mervyn, Sajin and Sarana

Home » No nominations for Duminda, Mervyn, Sajin and Sarana