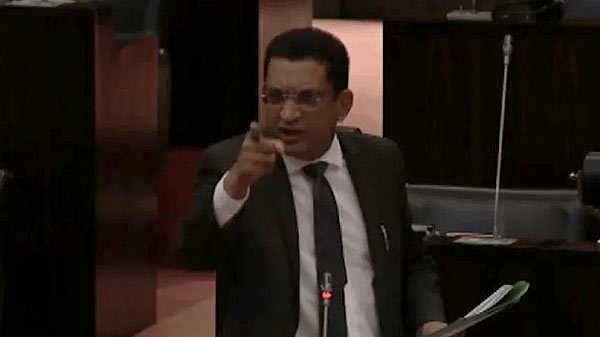 Responding to a question raised by Tamil National Alliance (TNA) Parliamentarian Shanakiyan Rajaputhiran Rasamanickam who questioned the Government over the failure to release Tamil political prisoners, he said there are no political prisoners but there are those detained under the Prevention of Terrorism Act (PTA).

“Immediately after the LTTE was defeated in 2009 there were around 12,843 LTTE suspects who surrendered to the Government. The Government rehabilitated them and integrated them with the society. As a policy, all of them were reintegrated into society, given skills training and they are now living with the rest of the society, including 600 child soldiers.”

MP Rasamanickam citing several cases said that some of these persons are still being detained without any charges being filed. He noted that one of the main demands made during the recent protest march from Pottuvil to Point Pedro was the release of these political prisoners.

He requested the Prime Minister to take action with regard to this matter and ensure that these cases are expedited. “This was an election promise that was put forward. We have 100% faith in you. This is not just the request of the TNA, but nearly 100,000 people joined the march from and this was their demand. Even in the case of the Easter attacks, there are people who have been detained for nearly two years without any cases being filed against them. My question is are they going to be released? What is happening?”

Responding on behalf of the Prime Minister, Minister Ali Sabry, PC, said that discussions were held with the Attorney General and the Chief Justice on steps to be taken to expedite the pending cases.

He also tabled a document with the names of those being detained.

The Justice Minister said that the charges against those being detained are serious in nature and the Attorney General had been instructed to look into these cases individually and file cases against those who should be charged.