NO WITHDRAWING ARMY FROM NORTH 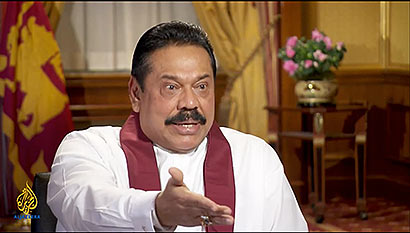 President Mahinda Rajapaksa asked as to how he could withdraw the army from the North without acceding to the requests of other Provincial Councils too to do the same.

“Where can I have the Army?. Ask somebody else to give me a place to keep the Army”, he said in an interview with Al Jazeera.

“First they (TNA) said something like that, and they changed it. “Because they can’t ask the army to be withdrawn. Then if the other Provincial Councils also asked me to withdraw their army camps all over the country where can I have the army.”

“Ask somebody else to give me a place to keep the army”.

Responding to another question that there is no need for such an Army with no war anymore, the President said “Do you think so. No, for security we need the army. We decide on our security and strength and how many army personnel we need.

“Do you think that when the army is discontinued what will happen. We are after a war. In the Vietnam war what happened.”

“So we have to change their attitudes. We have to rehabilitate them also”.

The President also said the Government has released all the private lands and kept certain lands in areas where the airport and ports are located. It has taken over some lands.” We have given up all the other lands”

He was replying to a question quoting from Navi Pillay’s report that the military is stationing troops in civilian areas and talk about the acquisition of private lands for the military camps and installations including a holiday resort.

The President responding to another question by the interviewer said after 30 years of war she(Pillay) wants only the last few days. “Why? Why? I can’t understand that. We must look into the whole 30 years. What happened? Now if somebody asks what happened in Japan after the war are we going to

inquire into that? You have to be fair in this game. Because the treatment must be equal to all countries. With the last few days, we can tell you , we are very open and Al Jazeera went there. They were in front of the battle field. We allowed them to go there.

3 Responses to NO WITHDRAWING ARMY FROM NORTH

Home » NO WITHDRAWING ARMY FROM NORTH