Obama expels 35 Russian diplomats in retaliation for US election hacking 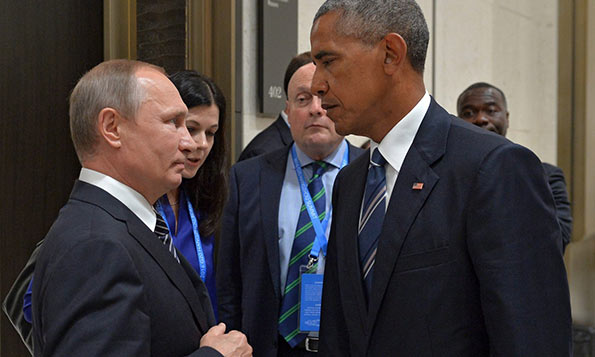 The Obama administration on Thursday announced its retaliation for Russian efforts to interfere with the US presidential election, ordering sweeping new sanctions that included the expulsion of 35 Russians.

US intelligence services believe Russia ordered cyber-attacks on the Democratic National Committee (DNC), Hillary Clinton’s campaign and other political organizations, in an attempt to influence the election in favor of the Republican candidate, Donald Trump.

In a statement issued two weeks after the president said he would respond to cyber-attacks by Moscow “at a time and place of our choosing”, Obama said Americans should “be alarmed by Russia’s actions” and pledged further action.

“I have issued an executive order that provides additional authority for responding to certain cyber activity that seeks to interfere with or undermine our election processes and institutions, or those of our allies or partners,” Obama said in the statement, released while he was vacationing with his family in Hawaii.

“Using this new authority, I have sanctioned nine entities and individuals: the GRU and the FSB, two Russian intelligence services; four individual officers of the GRU; and three companies that provided material support to the GRU’s cyber operations.

“In addition, the secretary of the treasury is designating two Russian individuals for using cyber-enabled means to cause misappropriation of funds and personal identifying information.” He also announced the closure of two Russian compounds in the US.

Obama added that more actions would be taken, “some of which will not be publicized”.

On Thursday, Trump, who has previously dismissed reports of Russian interference in the election, said in a statement: “It’s time for our country to move on to bigger and better things.”

He added, however, that “in the interest of our country and its great people, I will meet with leaders of the intelligence community next week in order to be updated on the facts of this situation.”

In a conference call with reporters, senior White House officials said the president-elect’s transition team was informed of the sanctions before they were announced on Thursday. Trump and Obama spoke on Wednesday, they said.

The officials added that the actions were a necessary response to “very disturbing Russian threats to US national security”.

“There has to be a cost and a consequence for what Russia has done,” a senior administration official said. “It is in a extraordinary step for them to interfere in the democratic process here in the United States of America. There needs to be a price for that.”

In Moscow, a Putin spokesman said Russia regretted the new sanctions and would consider retaliatory measures.

Diplomatic expulsions are normally met with exactly reciprocal action. In this case, however, Moscow may pause for thought. With Trump, who has spoken positively about Russia and Vladimir Putin, just three weeks away from the White House, Russia may feel it is inadvisable to kick out 35 US diplomats.

However, Russian authorities on Thursday ordered the Anglo-American School of Moscow closed, according to CNN, citing a US official briefed on the matter. The school serves children of US, British and Canadian embassy personnel, and would effectively make a Russian posting difficult for US diplomats with families.

Konstantin Kosachyov, chairman of the international affairs committee in the upper house of the Russian parliament, was quoted by the RIA news agency as saying the US move represented “the death throes of political corpses”.

The Twitter feed of the Russian embassy in London, meanwhile, called the Obama administration “hapless” and attached a picture of a duck with the word “LAME” emblazoned across it.

On the White House call, officials were asked about the prospect of Trump overturning the sanctions. They acknowledged that a future president could reverse course but warned against such an “inadvisable” step.

“We have no reason to believe that Russia’s activities will cease,” a senior official said. “One reason why I think it is necessary to sustain these actions is because there’s every reason to believe Russia will interfere with future US elections.”

On Capitol Hill, Democrats applauded the president’s action, called for further measures and emphasized bipartisan support for a thorough investigation into Russian hacking.

“I hope the incoming Trump administration, which has been far too close to Russia throughout the campaign and transition, won’t think for one second about weakening these new sanctions or our existing regime,” incoming Senate minority leader Chuck Schumer said in a statement.

“Both parties ought to be united in standing up to Russian interference in our elections, to their cyber attacks, their illegal annexation of Crimea and other extra-legal interventions.”

Ben Cardin, the top Democrat on the Senate foreign relations committee, called for further sanctions from the new Congress when it convenes in January.

GOP leaders were quick to frame the new sanctions as too little, too late.

“While today’s action by the administration is overdue,” House speaker Paul Ryan said in a statement, “it is an appropriate way to end eight years of failed policy with Russia. And it serves as a prime example of this administration’s ineffective foreign policy that has left America weaker in the eyes of the world.”

“Ultimately, [the sanctions] are a small price for Russia to pay for its brazen attack on American democracy,” the two men said in a joint statement. “We intend to lead the effort in the new Congress to impose stronger sanctions on Russia.”

The 35 Russian diplomats being expelled are “intelligence operatives”, Obama said. The state department has declared them “persona non grata” and they will be given 72 hours to leave the country.

Starting on Friday at noon, the White House said, Russia will be denied access to compounds in Maryland and New York that have been used for intelligence-related purposes.

A statement from the state department said the diplomatic expulsions were a response not only to hacking but to “a pattern of harassment of our diplomats overseas, that has increased over the last four years, including a significant increase in the last 12 months”.

The statement said the harassment has included “arbitrary police stops, physical assault, and the broadcast on state TV of personal details about our personnel that put them at risk”.

For some time, US diplomats in Russia have anecdotally reported being followed and harassed by police.

In June, a US diplomat was wrestled to the ground by a policeman as he scrambled to get inside the embassy. Russian authorities said the man was a CIA agent operating under diplomatic cover.