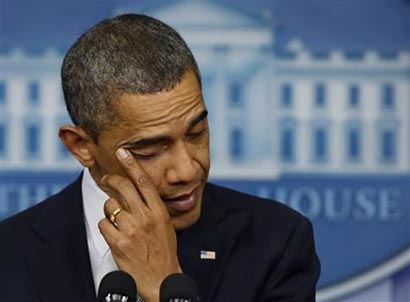 WASHINGTON (Reuters) – President Barack Obama urged Americans on Saturday to join in solidarity as they mourn the victims of a shooting rampage at a Connecticut elementary school, saying the hearts of parents across the country were “heavy with hurt” for the lives lost.

In his weekly radio and Internet speech, Obama also repeated a message he put forth on Friday, just hours after one of the worst mass shootings in U.S. history, on the need to set aside politics and “take meaningful action to prevent more tragedies like this.”

But Obama went no further than that, and again stopped short of specifically calling for tighter gun-control laws.

Twenty children were killed by a heavily armed gunman who opened fire at a school in Newtown, Connecticut, on Friday. He killed at least 26 people there before turning his gun on himself.

“We grieve for the families of those we lost. And we keep in our prayers the parents of those who survived,” Obama said.

The shooting spree reignited a debate over gun-control in a country with a flourishing gun culture and a strong gun lobby, which has discouraged most politicians from any major efforts to address the easy availability of firearms.

Obama mostly steered clear of the issue during his successful re-election campaign this year, and it remains unclear whether he might be willing to take a more assertive approach now that he has secured a second term.

New York City Mayor Michael Bloomberg, who runs a coalition of mayors on gun policy, said on Friday the Democratic president should press ahead despite likely opposition from Republicans who control the U.S. House of Representatives.

“We have heard all the rhetoric before. What we have not seen is leadership – not from the White House and not from Congress. That must end today,” Bloomberg said in a statement.

Ticking off some of the recent shooting incidents, Obama said in his Saturday address: “As a nation, we have endured far too many of these tragedies in the last few years.”

His response to previous high-profile shootings was to call for a national conversation on how to curb gun violence.

“This weekend, Michelle and I are doing what I know every parent is doing – holding our children as close as we can and reminding them how much we love them,” he said.

“There are families in Connecticut who can’t do that today. And they need all of us now,” he said. “All of us can extend a hand to those in need – to remind them that we are there for them, that we are praying for them.”

The 20-year-old gunman, who law enforcement sources identified as Adam Lanza, opened fire on a classroom at Sandy Hook Elementary School, which serves children from ages 5 to 10.

Authorities found 18 children and seven adults, including the gunman, dead at the school, and two children were pronounced dead later after being take to a hospital.

“Most of those who died were just young children with their whole lives ahead of them. And every parent in America has a heart heavy with hurt,” Obama said.

Obama had to struggle to control his emotions during his televised statement on Friday in the White House briefing where his voice cracked and he wiped away tears.

Partisan bickering in Washington, divided by a battle over a looming “fiscal cliff” of tax hikes and spending cuts, was put on hold amid mourning for the Connecticut dead.

House Speaker John Boehner, the top Republican in Congress, said he had canceled the Republican weekly address for Saturday “so that President Obama can speak for the entire nation at this time of mourning.”