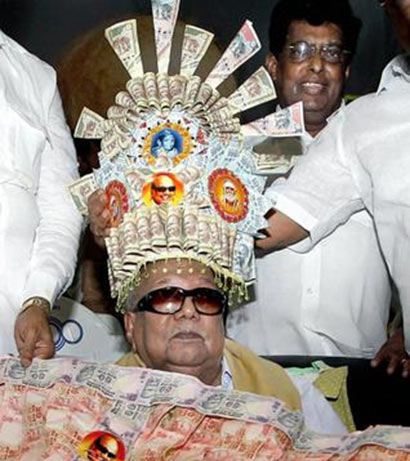 Chairman of the Tamil Eelam Supporters Association (TESO) and President of the DMK addressing a meeting held in Chennai to celebrate his 89th birthday vowed to create a separate state for Tamils in Sri Lanka.

At the birthday bash the ageing leader’s supporters decorated him with a crown and a garland made out of bank notes and when a somewhat comical looking photo of him with the adornments was published in the Hindu one reader commented: “The picture symbolizes the most vulgar display of money power till date by any politicial party.Very sad to see this.”

Karunanidhi said the conference slated for August 5 in Villupuram should help create a separate Eelam for Tamils in Sri Lanka . The conference is that of the Tamil Eelam Supporters Association of which he is the self appointed leader.

Addressing further the birthday bash meeting on June 3 Karunanidhi reportedly said Tamils were discriminated against in Sri Lanka and living without self respect in their country.

The conference will be organised in coordination with two other extremis political groups in Tamil Nadu, Dravidar Kazhagam and Viduthalai Chiruthaikal Katchi (VCK).

The Hindu published also the following details : “Mr Karunanidhi, who is a partner in the Congress-led United Progressive Alliance (UPA), claimed that the DMK never compromised on its principles and had not remained silent when the government in which it was a part of pursued anti-people policies. (The UPA policy since its very inception has been for a united Sri Lanka)

“In the past the DMK had supported the Congress government led by Indira Gandhi. But, when she imposed Emergency, it had opposed it tooth and nail. Hundreds of DMK members and functionaries, including M.K. Stalin and Arcot N. Veeraswami, had to languish in jail.

“Similarly, when the BJP-led government turned against minorities, particularly Muslims, the DMK walked out of the coalition, though it was led by A.B. Vajpayee, whom he described as a rare leader in the BJP.

“He said that the DMK was committed to people’s welfare and it was due to that commitment that his party organised a demonstration against the hike in price of petrol.

“The Congress came out with an explanation for hiking petrol price and announced a partial rollback. But, you must keep in mind that the AIADMK government did not bother to reduce the price of milk, bus fare and electricity tariff though its allies raised their voice.”

“Mr. Karunanidhi said that the AIADMK government had no locus standi to criticise the Centre for the petrol price hike after making the people of Tamil Nadu shoulder additional burden to the tune of over 18,000 crore in the form of taxes and price hikes. “The DMK government always presented tax free budgets.”

“Earlier in the day, the birthday celebrations began with the planting of a sapling at Mr. Karunanidhi’s C.I.T. Colony residence.

“He cut a cake with family members at Gopalapuram, visited the memorials of DMK founder C.N. Annadurai and Dravidar Kazhagam founder Periyar E.V. Ramasamy and received scores of party workers who made a beeline for Anna Arivalayam to wish him.

“The celebrations culminated in the public meeting, which was held on a stage designed to resemble the study at his Gopalapuram residence.

“Prime Minister Manmohan Singh and AICC president Sonia Gandhi were among those who greeted him.”