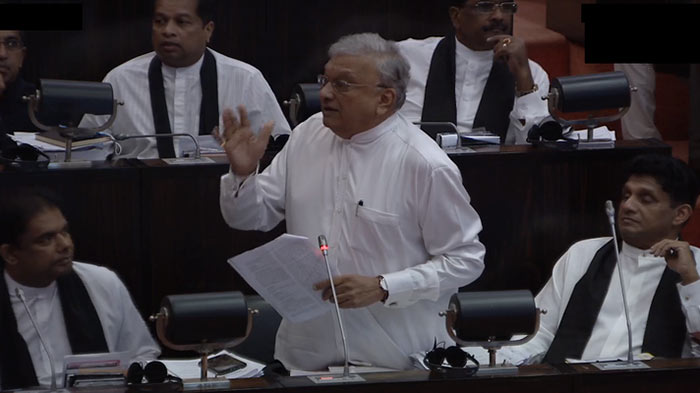 Premalal Jayasekera, who was sentenced to death, took oath as a Member of the ninth Parliament. He took oath before Speaker of House Mahinda Yapa Abeywardena.

Jayasekera was escorted to Parliament this morning by officials of the Prisons Department. Jayasekera, despite being sentenced to death, was elected to Parliament at the recently concluded General Election after obtaining 104,237 preferential votes.

Jayasekara and two others were recently issued death sentences by the Ratnapura High Court, over the murder of an opposition activist during the 2015 Presidential Election period.

Raising a Point of Order Chief Opposition Whip MP Lakshman Kiriella said an individual who has been sentenced to death by a High Court was sworn in as a MP today. The MP recalled that a similar incident was reported in 2010 in Parliament, when the Opposition sought approval to allow Sarath Fonseka, who was imprisoned at the time, to be brought to Parliament.

MP Kiriella noted that Minister GL Peiris at the time cited that, according to Article 89 of the Constitution, a Member of Parliament loses his seat as soon as he is sentenced by a High Court. MP Kiriella also stated that according to GL Peris, when an individual is sentenced to death the seat is automatically lost.

Taking the floor Minister Dinesh Gunawardena said only a motion can put into question an individual’s seat in Parliament.

MP Fonseka charged that today Premalal Jayasekera was sworn in as a MP after being sentenced to death for murder by a High Court. He also recalled that the order states that Jayasekera can take oath in Parliament while clearly stating that attending future Parliament sittings should be determined by the Speaker.

Recalling his experience, MP Fonseka said he was imprisoned for 30 years, with the Speaker informing him that he was not eligible to attend Parliament sittings. He claimed that the Speaker must reach a decision.