Out of tragedy, fortune for Sri Lankan tsunami village 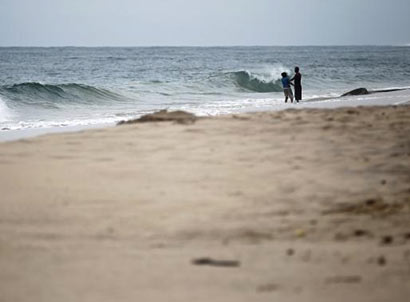 As towering waves came crashing into the southern coast of Sri Lanka on Dec. 26, 2004, Kushil Gunasekera gathered up his children and they ran for their lives to a nearby temple, the highest point they could find.

Returning later to his village in Seenigama district, he found a heart-breaking scene of death and devastation: one in four had been killed by the Boxing Day tsunami that swept across the Indian Ocean.

A decade on, Seenigama has risen from the ashes and is now a model of prosperity, thanks in large part to the efforts of Gunasekera who led a relief drive from the ruins of his ancestral home and later gave up his lucrative sugar business to devote himself to a charity he had founded in 1999.

Seenigama is an outlier, however, along the ravaged coastline. Tourists have returned to the palm-fringed beaches but livelihoods still hang by a thread in many villages that got scant assistance from the state.

In nearby Pereliya village – where more than 1,500 people perished, most of them passengers on a train that was hurled off its tracks as the waves rolled in – many feel abandoned and angry.

“Nothing has changed in our lives,” said G. Premalal, a fisherman at Pereliya beach where the government has erected a granite monument to the tsunami dead. “We have low quality houses. A lot of money was donated for us, but it was not distributed equally. Some got richer and richer because of the tsunami money, while others simply became poorer.”

More than 250,000 people died in the tsunami, which was triggered by a 9.0-magnitude earthquake off the coast of Indonesia’s Sumatra island.

Indonesia bore the brunt, but Sri Lanka was the next worst-affected country with a death toll of about 40,000.

Seenigama, about 110 km (70 miles) south of the island nation’s capital, Colombo, was hit particularly hard by the tsunami because reefs that might have shielded it had been destroyed by years of coral mining.

Years before the disaster, Gunasekera had started his Foundation of Goodness non-governmental organisation to generate alternative livelihoods for the coral miners. But the tsunami, which wrecked thousands of houses and schools, presented him with a much bigger challenge.

Seven photographs are propped up on a table in the front hall of D. Karunawathi’s house, a reminder of the family members she lost in the tsunami, including her mother, sister, daughter-in-law and grand-daughter. None of their bodies were found.

“Yes, we lost lives,” says 60-year-old Karunawathi from her robust two-storey house. “But we got a permanent home.”

But Gunasekera’s project went far beyond bricks and mortar.

Leaning on his own charisma and connections, including some of Sri Lanka’s best-known cricketers, Gunasekera brought together villagers, volunteers and donors, ploughing financial assistance into long-term projects to build a comprehensive and sustainable model of community development.

The project now provides free services for more than 25,000 people, ranging from healthcare to vocational training and a sports academy for the young that has already produced two national-level cricketers.

On the day of the disaster, Pulina Tharanga had set out for a school cricket match with a pair of shoes that his mother had bought for 2,000 rupees ($15), money she had earned selling rice noodles over several months. When he returned she was dead.

“She had asked me not to play cricket because she couldn’t afford it,” said Tharanga, who played for Sri Lanka’s junior national team in the 2012 World Cup in Brisbane, Australia.

The Foundation of Goodness village project, which costs about $1 a year, depends heavily on foreign donors. The academy’s cricket ground was financed by England’s Surrey Cricket Club and a swimming pool was funded by Canadian rock singer Bryan Adams.

“We harness waves of compassion to overcome waves of destruction and rebuild better,” Gunasekera told Reuters. “When a tragedy like that happens, you can’t reverse it. You need to look ahead and stay positive.”