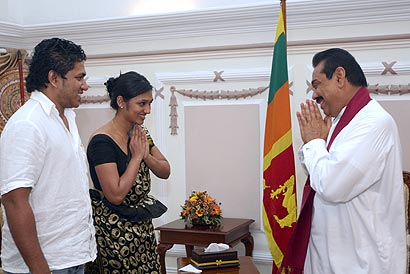 Gampaha District United National Party MP and actress Upeksha Swarnamali popularly known as ‘Pabha’ expressed her support to the government on the 18th Amendment to the constitution a short while ago. Meanwhile Nuwara Eliya District UNP MP and former journalist J. Shree Ranga and Kurunegala District MP Nilwala Wijesinghe also have decided to extend their support to the 18th Amendment. All these three Opposition MPs were elected to the Parliament after contesting the last General Election under UNP ticket.

Upeksha Swarnamali MP met President Mahinda Rajapaksa this afternoon on 7th September, and pledged her support to the proposed Amendment at Temple Trees. She was accompanied with her husband Mahesh Chaminda at the meeting.

The Prime Minister D.M.Jayaratne presented the 18th Amendment to Parliament today and the debate will begin tomorrow.