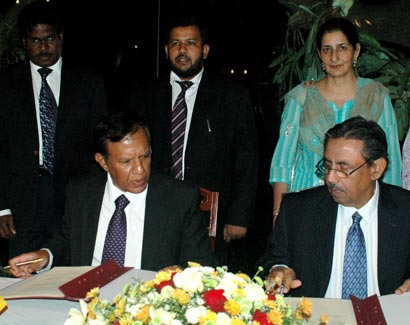 The Secretarial Level Meeting and talks between Pakistan and Sri Lanka on the bilateral Free Trade Agreement (FTA) in Colombo were concluded on August 18. The two sides reviewed several bilateral trade aspects and focused on the possibility of mutual tariff concession entitlements on selected items.

The two sides noted the friendly ties and the growing commercial relations between Pakistan and Sri Lanka and acknowledged that the Pakistan- Sri Lanka Free Trade Agreement (PSFTA), which came into force in mid-2005 has helped the two nations enhance their bilateral trade from US $ 147 million in 2004 to US $ 342 million by 2010, representing a substantial increase of 133%.

Among the important decisions reached are that Sri Lanka would allocate importation of the entire basmati rice quota of 6000 M/T agreed under the PSFTA in 2005 to the private sector from 2012. Pakistan would restore the same level of competitiveness as agreed before for Sri Lankan betel leaves by adjusting the current margin of preference. Pakistan would consider granting concessionary market access for electrical items such as electrical switches and bottle cooling machines. Pakistan confirmed to remove crude coconut oil from their No Concessions list as agreed earlier. Sri Lanka would consider categorizing onyx products imported from Pakistan as handicrafts.

Sri Lanka meanwhile would continue its discussion with Pakistan for the purpose of pursuing its export interests in the automotive rubber products sector. Sri Lanka Export Development Board and Trade Development Authority of Pakistan would consider signing an agreement for close collaboration for promotion of trade and business visitors to exhibitions to be held in Pakistan and Sri Lanka in 2012.

Sri Lanka agreed to look into the complaints of difficulties encountered by Pakistan exporters of cement and take appropriate action in consultation with the relevant authorities in Sri Lanka.  Pakistan and Sri Lanka would take early action to activate the Agreement on Cooperation and Mutual Administrative Assonance in Customs Matters. The two sides also discussed the modalities and appropriate institutional mechanisms for further expanding the existing commercial and economic cooperation between the two countries, with special emphasis on investment, services, customs cooperation, dispute settlement and further deepening of the FTA. The two sides agreed to meet at an early date to review the progress of the implementation of decisions reached at the discussions.