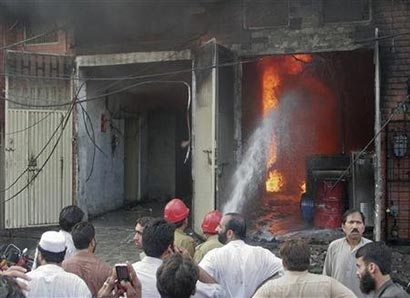 KARACHI, Pakistan (Reuters) – Fires swept through two factories in Pakistan, one in the city of Karachi and the other in Lahore, killing at least 125 people, police and government officials said on Wednesday.

The death toll from the late Tuesday fires is likely to raise fresh questions about industrial safety in the nuclear-armed South Asian nation and draw more criticism of the deeply unpopular government.

In the deadliest incident, flames raced through a garment factory in the teeming commercial capital of Karachi, killing at least 100 people.

“People started screaming for their lives,” said Mohammad Asif, 20. “Everyone came to the window. I jumped from the third floor.”

In Lahore, a fire raged in a shoe factory, killing at least 25 people.

Critics say Pakistan’s government is too corrupt and ineffective to focus on the welfare of workers and a dizzying array of other problems, from crippling power cuts, to widespread poverty to a Taliban insurgency.

“The owners were more concerned with safeguarding the garments in the factory than the workers,” said garment factory employee Mohammad Pervez, holding up a photograph of his cousin, one of the workers who is still missing.

“If there were no metal grills on the windows a lot of people would have been save. The factory was overflowing with garments and fabrics. Whoever complained was fired.”

At a Karachi hospital, about 30 bodies burned beyond recognition were lined up at a morgue.

Senior Superintendent of Police Amir Farooqi told Reuters that police were raiding parts of Karachi to search for the factory owners.

Farooqi said 35 people were injured in the garment factory fire and bodies were still being recovered from the facility which employed about 450 people.

The latest death toll in Karachi was more than 100 people, said Farooqi.

Smoke was still rising from the factory as rescue workers pulled out charred corpses and covered them in white sheets. Relatives of workers stood around in the street awaiting word of their fate. Several wept.

The cause of the garment factory fire was not clear.

“Within two minutes there was fire in the entire factory,” said factory worker Liaqat Hussain, 29, from his hospital bed where he was being treated for burns all over his body.

“The gate was closed. There was no access to get out, we were trapped inside.”

In Lahore, workers at the shoe factory suspected that the fire was caused by a problem with a generator.

“We saw our colleagues burning alive, in flames,” said Shabdir Hussain, from his hospital bed. “We could do nothing. We saved our lives by jumping from the roof.”

Successive governments have been unable to provide a reliable power supply so factories have to have their own generators, powered by diesel or petrol, if they want to avoid regular, lengthy power cuts.