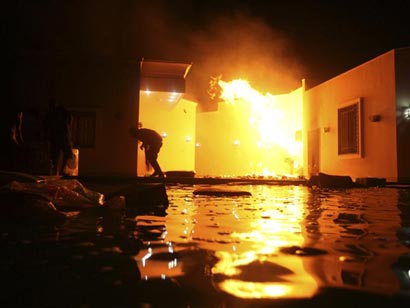 (CNN) — The United States ambassador to Libya, J. Christopher Stevens, was killed in a rocket attack on the American Consulate in the city of Benghazi on Tuesday, a contractor working at the mission said Wednesday after seeing Stevens’ body.

Three American security staff were also killed, said the contractor, who asked not to be named for security reasons.

He said he saw all four bodies on the street Wednesday morning. The bodies are now in the Central Hospital in Benghazi, he said.

Libyan Deputy Prime Minister Mustafa Abushagur appeared to confirm that the envoy had been killed, saying that Stevens was “a friend of Libya, and we are shocked at the the attacks on the U.S. consulate in Benghazi.”

“I condemn these barbaric acts in the strongest possible terms. This is an attack on America, Libya and free people everywhere,” Abushagur said on Twitter.

The contractor in Benghazi said he could hear rocket-propelled grenade attacks last night.

Libyans were also killed, the contractor said, saying the victims were shot on the spot.

The deaths came as protesters attacked U.S. diplomatic compounds in Libya and Egypt on Tuesday, angry about an online film considered offensive to Islam.

The United States has not confirmed the deaths.

Stevens was the American envoy to the Libyan rebel movement that overthrew dictator Moammar Gadhafi last year, based in the rebel capital of Benghazi.

A speaker of Arabic and French, he was among the first American diplomats sent to Libya in 2007 when the United States resumed ties with the Gadhafi regime.

The last time an American ambassador was killed by terrorists was in 1979, when the envoy to Afghanistan, Adolph Dubs, was kidnapped and killed during an attempt to rescue him, according to State Department records.

3 Responses to U.S. ambassador to Libya, 3 others killed in rocket attack, witness says