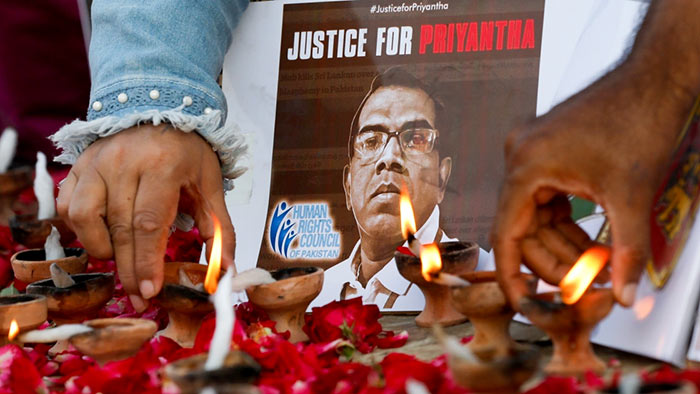 In a bold move, a factory in Pakistan’s Sialkot has hired another Sri Lankan national in place of his slain compatriot who was lynched earlier this month by supporters of a radical Islamist party on the allegations of blasphemy.

Special Representative to the Prime Minister on Religious Harmony Hafiz Mohammad Tahir Ashrafi disclosed this on Wednesday during a visit to the Sri Lankan High Commission along with Islamic preacher Maulana Tariq Jamil to express condolence over the Sialkot incident.

Supporters of the radical Tehreek-e-Labbaik Pakistan (TLP) lynched the factory’s general manager, Priyantha Kumara Diyawadana (49) before setting his body on fire over allegations of blasphemy earlier this month in Sialkot.

Talking to the media after meeting Sri Lankan High Commissioner Mohan Wijewickrama, Ashrafi said that the educational expenses of Kumara’s children would be borne by the factory owner.

“The administration has also given a job to a Sri Lankan citizen in the factory,” he added. “We are thankful to the Sri Lankans that in this atmosphere of fear, one of them chose to work here.” He, however, didn’t provide the name or other details about the new manager of the factory in Sialkot, which is famous for sports goods. Maulana Tariq Jamil termed the killing of Kumara as an act of “cruelty” for which the entire country was ashamed.