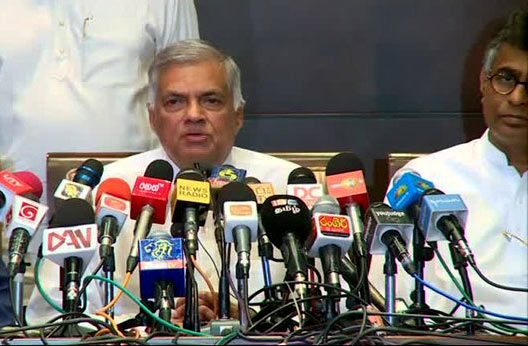 Ranil Wickremesinghe says that says that the Parliamentary majority is still with him and that requested that Parliament be convened immediately as it is not necessary to create a crisis and for the people to suffer.

“I urge to convene Parliament without leading the country into chaos. It is not necessary to create crisis in the country. Let the Parliament decide whether who should be the Prime Minister,” he said.

“As the largest party in parliament, I have become the Prime Minister.”

“The UPFA I saw has given notice that they were leaving the alliance, but that’s a matter now for parliament to decide the scope or the status of a national government which is established by parliament resolution,” he said.

He said this at a news conference held at temple Trees attended by constituent parties of the United National Front including Jathika Hela Urumaya (JHU), Sri Lanka Muslim Congress (SLMC) and the Tamil Progressive Alliance (TPA).

3 Responses to Parliamentary majority still with me – Ranil Wickremesinghe