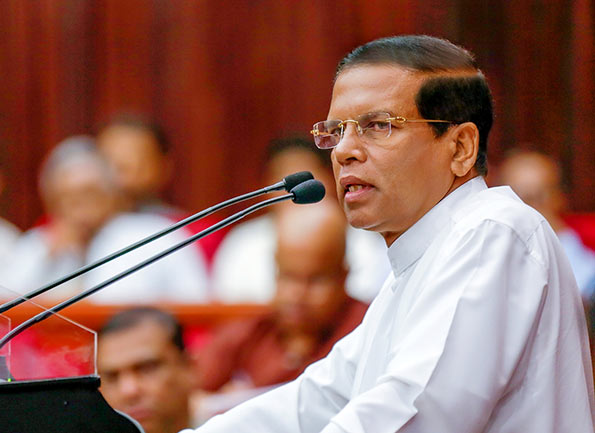 “Though the previous government delivered goods of high costs among the people in the North, there was no smile on their faces. But today when I go to North they welcome me with happiness and love in appreciation of the efforts of the government to build the reconciliation and coexistence by recognizing the rhythm of their hearts”, says President Maithripala Sirisena.

The President made these remarks at the program ‘Sahithya Kalaa Rasa Vindada (Enjoying of Literature and Art)’ held yesterday (March 16) at the BMICH.

This program has been organized as a national event to enhance the ability to enjoy the literature and art to help build the unity among communities. This was held parallel to the launch of the book ‘Adara Nil Menika Mihira Gee Kavi Saraniya’ of the senior journalist Lakshman Piyasena.

He stated that more responsibilities should be fulfilled by the literates, artists and journalists to strengthen the reconciliation process in this country.

“Building of the reconciliation in the country cannot be done only by the politicians. Religious leaders, artists, scholars and intellectuals should undertake that responsibility for a better future of the nation”, he said.

“To make this country a place where the people are living happily, the words ‘good governance’ and ‘reconciliation’ should become a reality. Though these words are laughed at and humiliated, the future of this country depends on the theoretical implementation of the good governance and the reconciliation”, the President further stated.

Speaker Karu Jayasuriya, Minister of Parliamentary Reforms and Mass Media Gayantha Karunathilaka and the Deputy Minister Karunarathne Paranavithana were among those participated in this occasion.