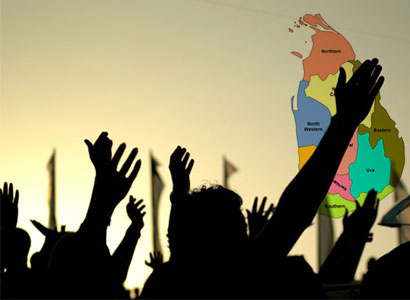 There are plenty of people in competition with the Government claiming to know what is best for the people of Sri Lanka. So let us work upon the premise that their work is solely to ensure the masses, especially the downtrodden and poor are given the best of State services. Given that we assume that all what these representatives from forums, organizations and association say and do connotes to mean that they care for the people ideally what they should be demanding is the complete removal of the Provincial Council system because for 24 years it has offered zero-service to the people who matter and the scale of crimes and abuse committed by these provincial councils is enough reason not to continue to support a system. So why do these organizations demand the continuance of the 13th amendment and the provincial council system?

Here are the reasons why we need to categorically tell the Government that they need to take immediate action on the PC system and not simply be satisfied to take case by case disciplinary action which is simply to remove party membership and deny nomination. That cane strategy has not stopped the increase in crimes in the least.

2013 – Crimes and Abuse in Provincial Councils

2012 – Crimes and Abuse in Provincial Councils

In 2012 alone 42 politicians belonging to the provincial councils have been filed with legal action.

2011 – Crimes and Abuse in Provincial Councils

2010 – Crimes and Abuse in Provincial Councils

Yes, the defense establishment are ensuring that these criminals are being arrested and charged, a scenario that was non-existent previously but at what cost is all this and do we need to put up with this any longer?

We are all well aware that the PC system came about after India forced Sri Lanka to sign the Indo-Lanka Peace Accord in 1987 and therafter to amend its Constitution to introduce a system that replicated the federal system in India. Those drafting the amendment and PC system on behalf of Sri Lanka must have forgotten the size of Sri Lanka or its population as compared to that of India.

Anyway the Constitution of Sri Lanka was forced to accept the 13th amendment and PC system on 14 November 1987.

India’s reason for the 13th amendment was that it would address Sri Lanka’s “ethnic” problem. Agreeing to the 13th amendment was UNP, SLMP of Vijaya Kumaratunga, CP, LSSP and NSSP – we demand to know from them where the ethnic problem is and how in 24 years has the ethnic problem being solved? If it hasn’t been solved in 24 years and the terrorist problem was solved in 3 years it certainly shows these political parties that they have erred. Now some of these members are MPs enjoying backdoor privileges and yet using their office to undermine the national security of the nation.

Of course it was anyones guess as to why India insisted the merger of North and East subject to a referendum within a year which was never held and the demerger of the 2 provinces took place after the JVP filed an FR and successfully demerged the 2 provinces in 2006. With that precedent some advisors have fooled the President into agreeing to simply passing a bill removing his right to merge 2 or more provinces. Maybe the best option is to merge all the provinces and make it into a unitary state which is what Sri Lanka has to be and nothing else.

A good look at the 24 years that the PC system has functioned reveals not so much the lack of delegation of powers which is often a complaint made against the Government but if the simple things that the PCs are assigned to do are not done, how can they be empowered to do far more serious matters? And with such a crime wave these PCs are asking for parliamentary privileges along the lines that the Government MPs are given – we shudder to think how they will use these privileges given the scale of crimes that exist.

When funds are allocated if they misappropriate those funds instead of utilizing them for basic requirements for the people of these provinces should anyone but they be blamed for their inability to perform instead of complaining that PCs cannot even transfer a laborer or summon a high government official. When we see the type of characters that get elected to these PCs would any official wish to even meet them and find their fate no different to what happened to a teacher who was forced to kneel infront of a PC member inside her own class. What a traumatizing experience for the teacher and what message does it give to children who are already victims of a poor education system?

Yes, political parties are to blame – it is they who claim to carry out stringent campaigns to select their nominees and what do they produce – the above records show the results. So if political parties do not encourage professionals and learned people who are respected by the people of the province and rely on thugs and goons to nominate naturally we know where Sri Lanka’s political stature is going to lead and no political parties will end up producing leaders for tomorrow and leaders who would serve the nation without plundering it.

There are many reasons why India’s 13th a and its PC system should be thrown into the bin – with such an incompetent lot of people, PCs that cannot even draft statutes (laws) and end up having to send to the AG’s department where it gathers dust, or when they cannot represent their case at the Financial Commission yet what is the use when they end up spending funds allocated on nothing that serves the province – we need to now say that the Government has to seriously address this once and for all.

Maintaining provincial councils is an unnecessary burden on the people. That money could easily be used for proper welfare measures and not to fatten the purses of PC members and their families. For 5 years people have to endure tremendous suffering and if they decide to choose the opposite camp the story is no different either.

Lets hear it from the horses mouths: “ most provincial ministers and members are only interested in the enlistment of their families and not that of the people. They want to make money. So when the centre doesn’t give money and the members get keen on making money, there is no purpose of provincial councils”. Gamini Jayawickreme Perera ( UNP). Former Chief Minister, Wayamba Province.

Rs.650million was spent by the Elections Department to hold 3 elections.

How many Provinces still suffer from the lack of basic amenities like a decent road? How much of funds is needed to put some gravel on to a muddy road so that the children don’t get splattered with mud before going to school and pregnant mothers don’t risk falling and hurting themselves or the elderly escape injury too?

The Government does not need to spoon feed PC members into prioritizing what they need to do. Even the Municipalities for that matter – how much of money do they waste and then bemoan that they need more funds to eradicate dengue when they don’t come to pick the garbage on time or clean the drains and the people end up having to pay the municipality to collect their garbage as well as hire laborers to clear the public drains.

If the Chief Minister of the Eastern Provincial Council Abdul Majeed Mohammed says that “Sri Lanka doesn’t need provincial councils” that is a start and it is time that the others stop hiding behind various masks in view of what merits their existence and put the country before self for a change.

The ranaviruwo and the Defense Secretary has led the way by eradicating terrorism and now 4 years after that victory the politicians are still dabbling away picking straws without doing what they are voted to power to do. They are not voted to please India.

When the organizations that profess to also be concerned about the public carry placards and send aggrieved notes to foreign climes bemoaning that the Government is diluting the 13th amendment and thinking of abolishing the PC system they are no different to the PC members listed above because by wanting such a system to exist they are only encouraging crimes against people. That shows their true colors too.

We are at a critical juncture. If the armed forces led by Defense Secretary cleaned the stables and eradicated the terrorists it is now time to clean the political stable starting with removing all the foreign imposed legislatures beginning with the 13th amendment and the PC system and introducing an indigenous one. Nothing is impossible to do if there is a will to do it. If we successfully introduced and ran an indigenous rehabilitation and reintegration program while the West still has scores of prisoners in don’t know where locations, the previously functioning district councils are the best solution. Moreover, it would be good for the political parties to put an end to nominating goons and thugs and start to nurture people of respect and until such time the people must stop casting their votes for such characters without complaining after voting for them.

As for the organizations professing to be concerned about the people – we now know that their concern has nothing to do with the interest of the people of Sri Lanka.