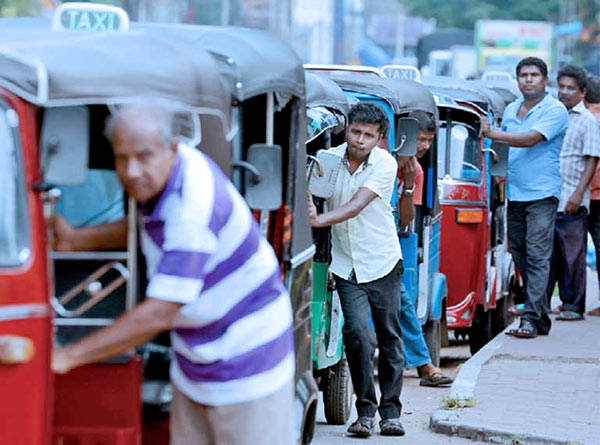 The Petroleum Resources Ministry is to hold a crisis meeting today to address the fuel shortage as panic buying of fuel continued for the second day yesterday with the Ceylon Petroleum Cooperation struggling to meet demand.

However, authorities assured that there were enough fuel stocks to meet demand until the next shipment arrived. “The issue is there is artificial demand created due to panic buying. We had enough stocks till 8 November,” explained Petroleum Resources Ministry Secretary Upali Marasinghe.

“The situation is under control.”

The CPC rejected the LIOC oil shipment on Tuesday last week as it failed to meet the required standard. Another shipment ordered by the CPC, due to arrive on 2 November, did not come in time. A breakdown in the country’s 50-year-old refinery, crippling local production for three days, led to a limitation in fuel supply prompting the CPC to ration the stocks issued. The daily fuel consumption in the country ranges from 1,800 MT-2,000 MT, while the CPC issues 2,500 MT of stocks.

However, due to the supply issue the authorities limited it to 2,000 MT to ensure buffer stocks were maintained till fresh shipments arrived, Marasinghe revealed. The situation sent consumers into a panic buying frenzy, with them forming long queues at filling stations.

A fresh shipment was ordered on the same day the LIOC shipment was rejected to compensate for the shortage in supply, he stated.

The rejected shipment vessel Mt TORM ASTRID returned to the Trincomalee Port where it still remains. However, the Ministry has informed the LIOC that the oil should not be unloaded at Trincomalee. In 2015 a rejected oil shipment belonging to IOC was later unloaded at the oil storage facility in Hambantota. Cabinet approved a decision to dispose of the fuel only two weeks ago.

A request by LIOC to refine the oil has also been rejected by CPC, Marasinghe explained, adding that if the company refines the oil on their own to meet the standards, the CPC was willing to consider the shipment.

“The shipment could be used if it is refined. They wanted us to bring a refinery shipment and refine the oil but we rejected that. If they want they can refine and submit it to us,” he said.

However, top CPC officials are still concerned over the delay in the shipment for CPC. The shipment, which should have left the Middle Eastern Port on 26 October, had not left by 29 October.

“This and the repeated breakdown of the refinery are too odd to be a coincidence,” said one official.

The refinery is now working at full capacity, Dr. Gamage said, adding that it supplies 750 MT to the market.

The CPC unions have renewed their calls to utilise the Trincomalee oil farm facility to avoid similar crises in the future. However, this was mooted by the Samarasinghe who said that although the CPC maintains a buffer stock, the supply was limited due to cash flow restrictions