Petrol, diesel can be sold for around Rs. 250 in Sri Lanka, PUCSL chairman tells COPE 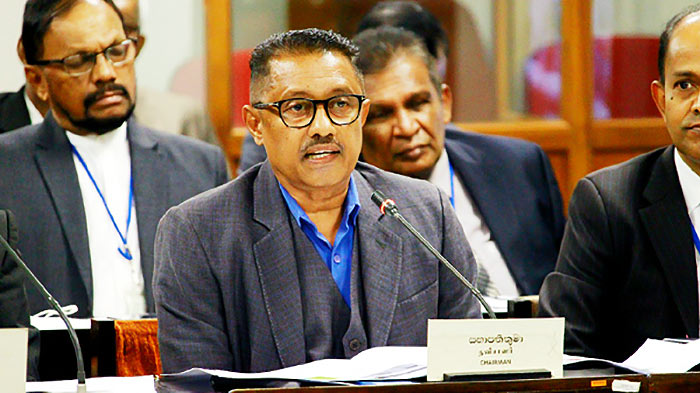 Petrol and diesel can be sold at a price of approximately Rs. 250 in Sri Lanka, said the chairman of the Public Utilities Commission of Sri Lanka (PUCSL) Janaka Ratnayake in a personal statement made to the Committee on Public Enterprises (COPE).

He stated this when COPE members in Parliament on July 06, under the chairmanship of MP Prof. Charita Herath to examine the Auditor General’s report for the years 2018 and 2019 and current performance of the Public Utilities Commission of Sri Lanka.

Explaining this further, PUCSL chairman mentioned that this was revealed in the statistics on the import prices of petroleum and the taxes levied by the government. He pointed out that petrol and diesel can be provided in Sri Lanka at Rs. 200 less than the current price. According to this, petrol and diesel can be sold at a price of approximately Rs. 250. He also said the government has collected a tax of Rs. 280 for one litre of diesel imported on July 01.

The PUCSL chairman noted that this is his personal statement and he would make the statement after consulting the data. Accordingly, the members present asked about the awareness of the officials of the commission and the officials of the board of directors said that they are not aware of it. It was also mentioned here that the Ministry of Finance has not formally informed about this.

COPE members inquired Ratnayake about his qualifications for becoming the chairman of this commission. He pointed out that he has obtained a special degree in Public Administration from the University of Sri Jayewardenepura and a postgraduate degree in Business Administration (MBA) from the University of Colombo. He also mentioned that he has also studied at Harvard University. As for his political qualifications, he stated that since 2005, the Rajapaksas have been greatly supported in forming governments.

COPE chairman mentioned that the statement made by PUCSL chief regarding the fuel price is more serious and the attention of the country would be drawn to the matter. Therefore, officials from the Ministry of Power & Energy and the PUCSL Chairman are expected to be summoned before the COPE to inspect the matter in the future, Prof. Herath said further.

Further, the purchase by the commission of a “Benz” car manufactured in the year 2005 without fuel or driver from a company called General Business (Pvt) Ltd without entering into any agreement for a period of one year from December 07, 2021 was also discussed at length at the COPE meeting. It was revealed that the annual rent for this vehicle was Rs. 4,500,000 and that Rs. 2,187,500 was paid on May 31 this year to the aforesaid company.

However, the COPE inquired as to why the files regarding the hiring of this vehicle were not submitted for audit, recommendations were given to hire a 15-year-old vehicle, as well as the irregularities in calling for bids for the hiring of this vehicle, and the issues of transparency in the payment of rent for this vehicle. In particular, the committee instructed the officer who signed the approval to provide money for this institution to act responsibly.

Accordingly, Prof. Herath recommended that an investigation be conducted and a full report be submitted to the COPE.

Further, although it was informed that the organisation structure and salary structure of the PUCSL should be developed under the recommendation of the National Salary and Cadre Commission and the approval of the Department of Management Services and that the Finance Minister should submit an amendment to the Cabinet and approve it, the committee discussed spending on certain functions without doing it by the end of 2021.

In particular, attention was paid to the approved electricity generation plan for the years 2018-2037. The officials present mentioned that data on another new generation plan was submitted in the year 2021 and was not approved as the appropriate requirements were not met. Here, the Committee mentioned that when the political authorities change, problems arise due to the change of these plans, so all parties should pay more attention to this.

Furthermore, under the Electricity (Distribution) Performance Standards Orders mentioned in a special gazette notice issued in 2016, the commission was assigned the responsibility of preparing and implementing the performance rules. Thus, the work that should be implemented within 36 months after the decree came into effect, although almost 4 years have passed, the committee drew attention to the fact that even the adaptation phase, which was planned to be completed in 2018, has not yet been completed. The officials who were present mentioned that this was planned to be done in 3 phases in 3 years and that it has not happened yet due to the need to change the system and the problems in the relationship between the parties involved.

5 Responses to Petrol, diesel can be sold for around Rs. 250 in Sri Lanka, PUCSL chairman tells COPE

Home » Petrol, diesel can be sold for around Rs. 250 in Sri Lanka, PUCSL chairman tells COPE