PM did not fulfil his promises – Radhakrishnan 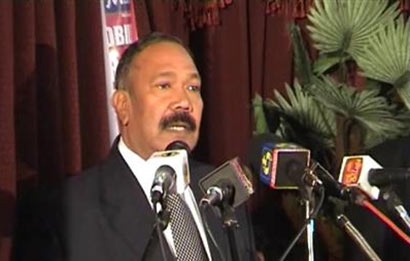 UNP MP V. Radhakrishnan yesterday alleged that Prime Minister Ranil Wickremesinghe did not keep his promise to appoint him as a Cabinet Minister.

Mr. Radhakrishnan told a news conference that the Prime Minister had agreed to give him a Cabinet post and a deputy minister’s post to Badulla District MP S. Aravinth Kumar, but both promises were broken.

He said complications had arisen in the assignment of subjects and responsibilities to the ministers as the Prime Minister and President Sirisena do not see eye to eye.

He said the fate that befell Somalia would befall this country if the rupees continues to depreciate in the manner that it has. “There is a need for someone to step in and mitigate in this war of attrition between the Prime Minister and the President. Otherwise, the present crisis will take a turn for the worse, endangering the future of this country,” he said.

Mr. Radhakrishnan said several backbenchers of the government had also expressed discontentment because they did not receive portfolios.

5 Responses to PM did not fulfil his promises – Radhakrishnan

Home » PM did not fulfil his promises – Radhakrishnan