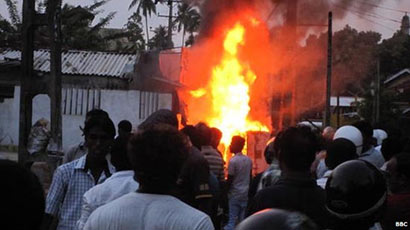 A police curfew was clamped in Alutgama and Beruwala to quell clashes that erupted in Aluthgama and then spread to Beruwala area last evening between two groups.

Bodu Bala Sena organisation yesterday held a protest and a rally at the Alutgama town to condemn the attack on a Bhikkhu by three youths in the area on the Poson Poya Day.

The chief monk of the Kurunduwatta Sri Vijayarama temple, Ven. Ayagama Vijitha Thera and his driver were allegedly attacked by three persons while the monk was attempting to resolve a conflict between his driver and a group of people at Dharga town.

Following the rally the participants of the rally were proceeding towards Sri Vijayaramaya, Kurnuduwatte in Dhraga Town when their vehicles were pelted with stones. Some of the vehicles were damaged in the attack including the one in which Ven Ayagama Vijitha Thera was travelling.

Others retaliated and the clashes spread to the town where shops had already been closed. Some of the shops were set on fire.

The protesters gathered outside the Aluthgama police station, demanding the arrest of attackers.One of the journalists was attacked and his camera smashed by the attackers of both sides.

Policemen from 22 surrounding stations including STF commandos were summoned to Aluthgama to prevent further violence.

Around ten shops were gutted.

Police spokesman SSP Ajith Rohana said police curfew had been imposed from 6.45 pm until further notice. The situation had been brought under control by last night. He said that unlawful assembly, holding rallies, and vehicular movement were forbidden during the curfew and instructions had been issued to take all those who did not comply with the law into custody.

Hundreds of passengers travelling in coastal lines trains were stranded at Payagala as the trains were stopped in view of the curfew.

Police curfew had been imposed in Beruwala area around 8.00 pm to prevent spread of clashes, police said.

(Courtesy: The Island / Pix by BBC)