Police force to be modernised: PM 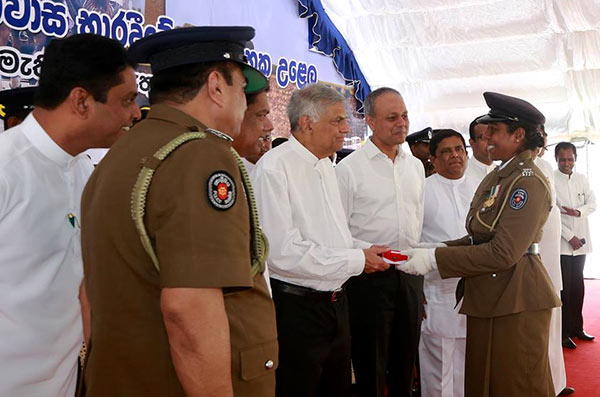 The Government will introduce new reforms to the Sri Lanka Police to make it more efficient and productive, Prime Minister Ranil Wickremesinghe said.

“The Sri Lanka Police is administered and functions under very archaic laws and regulations which were introduced a long time ago. We plan to modernise our Police Force by introducing laws and regulations for an effective and productive service to the nation,” the Prime Minister said.

The Prime Minister was speaking at a public gathering that followed the inauguration of the Police Officials’ Residential Complex at Wekunugoda, Galle.

“After 2015, we witnessed a decline in the number of organised crime. The rate of fixing criminal offences has been increased by over 70 percent about which we could not be fully satisfied,” the Prime Minister said.” With the elimination of crimes, the country becomes more stabilised. We are resolved to strengthen our Police Force with modern facilities and equipment to develop its capacity in handling criminal affairs. The respective minister is resolved to open up new universities in that respect which is fully supported by Inspector General of Police,” Prime Minister Wickremesinghe said.

“Our aim is to rebuild a law abiding society. We have established the Independent Police Commission aimed at halting political influence over Police affairs. Another issue in this respect is to find solutions to expedite the long and undue delays in court activities. The Sri Lanka Police is administered and functions under very archaic laws and regulations which were introduced over a century ago. Firstly, we have to modernise our Police Force by introducing laws and regulations for an effective and productive service to the nation,”the Premeier assured.

“Our contemporary Police Forces are confronted with various types of crimes. The crimes of today are different to those of past. Today, the Police have to handle new types of organised crime such as drug dealings in various forms. Police are currently held responsible in cracking down on organised crimes,” Prime Minister Wickremesinghe said.

“Our Police Force today is entrusted with the novel responsibilities of overcoming the rising wave of terrorist acts and violence of various forms. We learnt that in recent times the Police became the main target of terrorist outfits in both the South and North. We witnessed this situation mainly in the North. Hence, we had to operate special Police units, platoons and Special Task Forces to combat such terrorist activities,” the Prime Minister further said.

“On the other hand we are faced with new issues related to maintainance of Law and Order in the country. Many issues were political. As we fail to solve such problems through authentic political strategies, the people resorted to violence in order to find solutions to such issues. Therefore, the Police and the public had to face a problem which could not be solved through proper administrative involvement,” the Prime Minister said.

“The conflict in the North was solely political. After even the end of the war, the problem could not be completely solved. The Sinhala and Muslim political parties in the South persistently advocated devolution of power within a unitary state which led to conflict. In ending the terrorist war, the Tri-Forces and the Police made the supreme sacrifice. Therefore, we are obliged to halt all avenues which could pave the way for another war owing to the same past problems.

The main focus of our National Government’s is solving the national issue. We are now on the right track in solving this problem with the presentation of the Constitutional Steering Committee’s Interim Report to parliament,” the Prime Minister added.

“The two main parties have agreed upon some issues of national interest such as extensive power devolution, establishment of a Senate in addition to the Parliament, protecting rights, shunning all forms of prejudices, founding of an independent judiciary and the resettlement of Internally Displaced Persons in the war etc. as prescribed by the Constitutional Steering Committee.

In the past, the main obstacle to solving the national issues was the different ideologies of the Sri Lanka Freedom Party and the United National Party. We have to halt the political Tug-of-War regarding the main national problems. Now, we are united over theses national problems,” the Prime Minister said.

“On January 8, 2015 we were unified for the victory of President Maitripala Sirisena as the Common Presidential Candidate. All opposition political parties and civil society joined hands in finding a lasting solution to all national problems. President Maithripala Sirisena since assuming office as President devoted his time and energy to these issues of national importance,” the Premier said.

“Thereafter, the social and political reality of the country following the subsequent Parliamentary election paved the way for the establishment of the National Government of SLFP and UNP to address long lasted national issues.

So, all personal gains possible under a single party government are not practical under a National Government as such a rule is formed to achieve National goals of utmost importance.

From this stage onward we have to forge ahead with our national aspirations. We hope create a dialogue over the interim report. We are to make available for everyone a copy of the interim report. Parliament will conduct a debate on the report by October end. We want to create a productive dialogue over the matter in the country. In the process, we must not allow the extremist elements to obstruct our forward march. What we could do for the country we could accomplish through the Constitutional Steering Committee. Now the country is obliged to fulfill its national aspirations,” the Prime Minister reiterated.

6 Responses to Police force to be modernised: PM