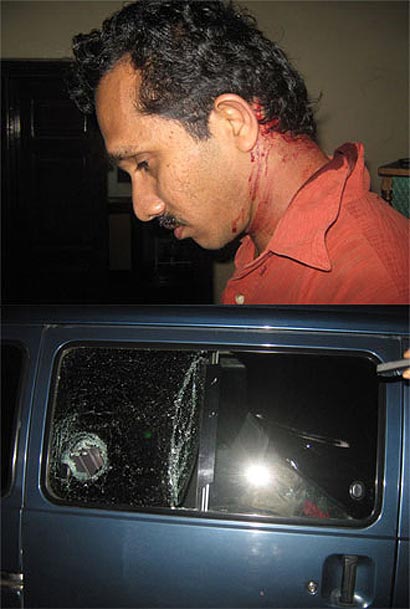 Investigations are being conducted into the incident where Janatha Vimukthi Peramuna (JVP) member and Democratic National Alliance (DNA) Parliamentarian Sunil Handunnetti and several others were assaulted this evening in Jaffna, a senior police official told Adaderana.

The official said that around 15 persons are suspected to have carried out the assault. Two separate police teams have been deployed to conduct a thorough probe into the incident, he said.

Mr. Handunnetti and two others were receiving treatment at the Jaffna Hospital.

Meanwhile, JVP General Secretary Tilvin Silva told Adaderana that members of an organization named “Api Sri Lankikayo” or “We are Sri Lankans” were on their way to attend a meeting at the residence of former MP Mrs. Padmini Sidambaranathan when a group riding motorcycles had followed them.

The meeting was to discuss ways and means to elicit information about those who had disappeared. When the meeting was in progress, the group which had followed them had stormed Mrs. Sidambaranathan’s residence and assaulted the JVP members, Mr. Silva added.

However, Media Centre for National Security (MCNS) Director General Lakshman Hulugalle said that persons from the area were probably responsible for the attack.

12 Responses to Police probe assault on JVPers in Jaffna