POLICY OF APPOINTING BEST PERSON AS PRINCIPAL SEEMS TO BE WAVERING: REGINALD 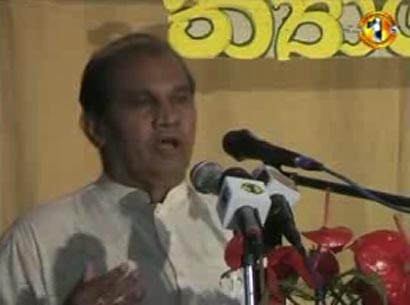 The policy I adopted in appointing the most suitable persons to posts of principal seems to be wavering, says Reginald Cooray, Minister of Minor Export Crops Promotion yesterday.

He was addressing a function held to launch the website of the Alutgama Sri Gnanissara Maha Vidyalaya. Students who had excelled both in academic and extra curricular activities were also felicitated at this function.

A group including many politicians,teachers and students were present at the occasion.

“I have not only appointed people who worked against me and who were not from my political party as school principals, but also promoted them. The reason is that they worked very hard.

Even if they worked for my party of worked for me, I took action against weak principals. As a result the school system is developing. However, today I can see a shift in that policy.

“It’s good to do politics on election platforms. But those political allegiances should not be considered when taking decisions in relation to schools, temples or kovils. What you should consider are the education and children,” said Minister Cooray.

Home » POLICY OF APPOINTING BEST PERSON AS PRINCIPAL SEEMS TO BE WAVERING: REGINALD