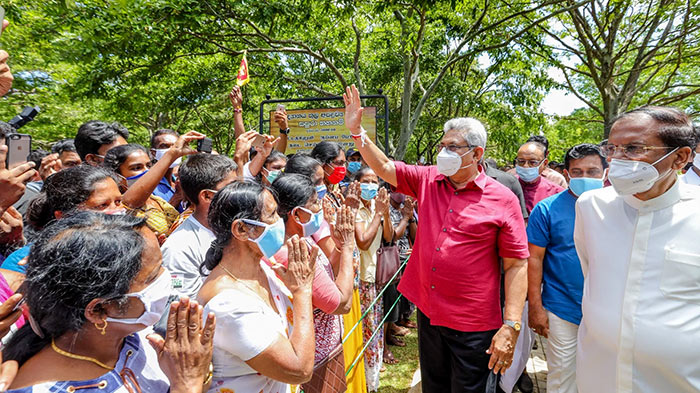 The farmers in Polonnaruwa made a strong plea to the President not to allow the intermediaries to create an artificial rice shortage. They pointed out that there was a bumper harvest in the previous seasons. ‘Hence, the Government should not allow the attempts to create a rice shortage to succeed,” the farmers said.

The farmers made this request to President Gotabaya Rajapaksa when he joined a public gathering held at the Siripura Provincial Council Ground in Polonnaruwa yesterday in support of Sri Lanka Podu Jana Peramuna (SLPP) candidates contesting the upcoming general election.

President Rajapaksa told the farmers that after the government assumed office, it had implemented a systematic strategy to rehabilitate deteriorating paddy storage facilities and to ensure an efficient paddy purchasing process. The President further said that the government has planned to act in a manner that would not cause any problem to the paddy farmers.

The President also joined the public gathering held in Kalukale in support of SLPP candidate Banda.

A set of proposals seeking redress for their problems was handed over to President Rajapaksa by the Maha Sangha of the area, when he joined the public gathering held at the Manampitiya Pratibha Hall. Following that, a Seth Pirith chanting was held to invoke blessings on the President. A group of teachers gathered in front of the Pratibha Hall handed over a set of proposals to the President. Former State Minister Roshan Ranasinghe was also present on the occasion.

President Rajapaksa also participated in a public meeting organised by former Chief Minister, Peshala Jayaratne in Kaduruwela this afternoon. The people gathered at this event requested the President to renovate the tanks in the area. They drew the President’s attention to the issues relating to supply of paddy seeds and fertiliser.

The President joined the public gathering organised at the Galwala Junction in Thambala and engaged in a cordial discussion with the residents of the area and inquired into their well-being.

A public gathering organised by the former President Maithripala Sirisena was held at Deepa Uyana, Polonnaruwa and President Rajapaksa joined this meeting and had a cordial discussion with the residents of the area.