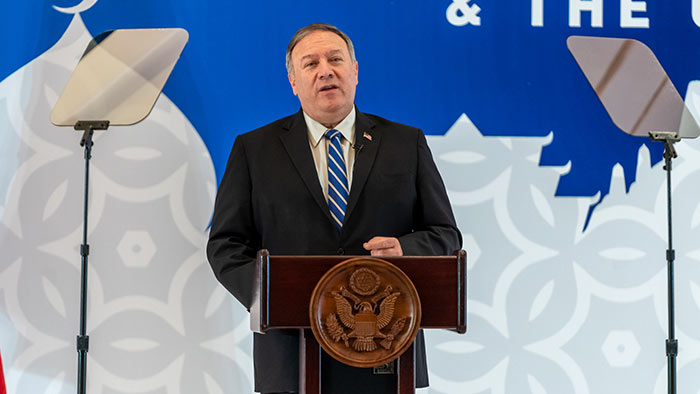 China is the “gravest threat” to the future of religious freedom, US Secretary of State Mike Pompeo said Thursday, in his latest verbal assault on Beijing during a whirlwind Asian tour.

Pompeo has made attacks against China the focus of his trip this week which kicked off in India and included visits to Sri Lanka, the Maldives, Indonesia and, later Friday, Vietnam.

In Indonesia — which has the world’s biggest Muslim population — Pompeo took aim at China’s treatment of its Uighur Muslim minority.

“The gravest threat to the future of religious freedom is the Chinese Communist Party’s war against people of all faiths: Muslims, Buddhists, Christians, and Falun Gong practitioners alike,” Pompeo said in a speech Thursday to major Muslim organisation the Nahdlatul Ulama.

“The atheist Chinese communist party has tried to convince the world that its brutalisation of Uighur Muslims in Xinjiang is necessary as counter-terrorism or poverty alleviation,” he added.

Rights groups say that more than one million Uighurs languish in camps in the northwest Xinjiang region as Beijing attempts to forcibly integrate the community and root out its Islamic heritage.

China has denied the numbers and describes the camps as vocational centres that teach skills to prevent the allure of Islamic radicalism following a series of attacks.

“But we know that there is no counter-terrorism justification in forcing Uighur Muslims to eat pork during Ramadan, or destroying a Muslim cemetery,” Pompeo said.

“There is no poverty-alleviation justification for forced sterilisations, or taking children away from their parents to be re-educated in state-run boarding schools.”

“The Chinese Communist Party has tried to convince Indonesians to look away from the torments your fellow Muslims are suffering… Search your hearts. Look at the facts,” he said.

“Think about what you know of how an authoritarian government treats those who resist its rule.”

China is Indonesia’s biggest trading partner and criticism in the Southeast Asian country of Beijing’s treatment of Uighurs has been muted.