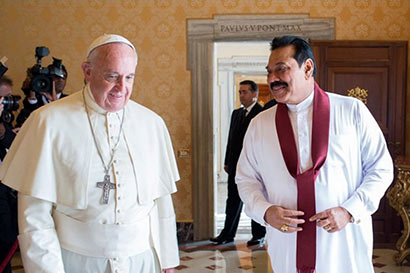 Pope Francis was first invited to visit Sri Lanka by former President Mahinda Rajapaksa. Although he was invited to welcome the Pope at Bandaranaike International Airport on Tuesday by the new government, the former President was not present at the event.

Gotabhaya Rajapaksa, who met Pope Francis in Vatican last year, was instrumental in facilitating the Papal visit. The former Defence Secretary’s wife, Ayoma Rajapaksa too was present at the meeting.