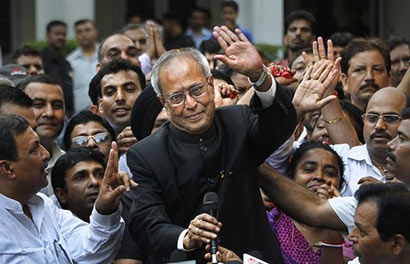 NEW DELHI: President-elect Pranab Mukherjee on Sunday thanked the people for his election to India’s highest office and said it would be his responsibility to defend and protect the Constitution.

“I have deep gratitude and appreciation for the people of this great country for conferring this distinction of electing me to the high office,” Mukherjee told reporters here.

“It would now be my responsibility to defend and protect the Constitution as President … I would try to justify in modest way to be trustworthy of my people,” he said.

Mukherjee said though he had polled over 7 lakh votes, the final result was still awaited and would be declared by the returning officer.

According to Mukherjee, during the last one month of campaigning for the presidential election he visited all the state capitals but interacted only with the legislators. Still, he said, he could feel the overwhelming support and affection of ordinary people.

“The overwhelming support and affection of ordinary people which I felt during the tour was really remarkable,” he said.

He also thanked all sections of society, the political parties and parliamentarians for the support during his more than four decades of public life.

“I received much more than I gave them,” he said.

Mukherjee appreciated the congratulations from his rival PA Sangma.