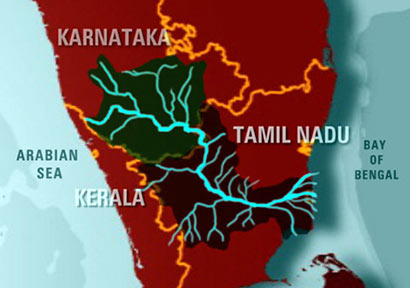 After jointly bashing Sri Lanka over the ethnic Tamil issue political arch rivals in Tamil Nadu have now started attacking their other neighbor , the state of Karnataka for their scarcity of water in one voice.

have issued scathing attacks and initiated legal battles against Karnataka state authorities for the bone dry conditions in Tamil Nadu and the immense problems their Tamil Nadu farmers are facing  alleging lessening waters of River Cauvery which has its beginnings in Karnataka state.

Lashing out at the Tamil Nadu government for  raking up the Cauvery issue so often, Chief Minister D.V. Sadananda Gowda of Karnatakaaa on Saturday promised to protect the interests of Karnataka farmers in the Cauvery basin.

Speaking to reporters at his home office ‘Krishna’ , Mr. Gowda accused the Tamil Nadu government of raising the water-sharing dispute every now and then for political gains.

“The government is committed to protecting the interests of Karnataka farmers, and the question of releasing water to Tamil Nadu does not arise.” The Tamil Nadu government has approached the Supreme Court seeking urgent directions to restrain Karnataka from taking up summer irrigation and prevent consequent depletion of storage in Karnataka reservoirs, in contravention of the final order passed by the Cauvery Water Disputes Tribunal in February 2007.

The application stated that on March 15, storage in the four reservoirs had depleted and only about 20 to 30 tmcft of water would remain by May-end, as against the full storage of 114.5 tmcft.

Mr. Gowda said that he had discussions with Minister for Water Resources Basavaraj Bommai and officials of the Law Department on Tamil Nadu moving the Supreme Court. “We will take the matter seriously and deal with it legally.”

Karnataka is utilising the Cauvery water stored in its reservoirs in an “unjust fashion” between February and May for summer irrigation, Chief Minister Jayalalithaa said in the Assembly on Friday.

Responding to a call attention motion on the opinions expressed by various leaders in the Karnataka Assembly recently that “not a drop of water should be given to Tamil Nadu” from the Cauvery, Ms. Jayalalithaa said that as per the final award of the Cauvery Tribunal, Karnataka should not use the water for summer irrigation. However, from 2007 to 2011, Karnataka utilised water to the extent of 42 thousand million cubic feet (tmcft) to 73 tmcft from its four major reservoirs. “This water should not have been used, but stored for irrigation for the next crop,” she contended.

Karnataka does not release water for kuruvai crop of Tamil Nadu during June and July as stipulated by the Tribunal, she regretted. On the other hand, it starts storing water in all its reservoirs as soon as the monsoon sets in since the reservoirs have already been depleted for summer irrigation. “That was why the Tamil Nadu government had to move an interim petition before the Supreme Court that Karnataka should not be permitted to utilise the water from its four reservoirs between February and May,” she explained.

Ms. Jayalalithaa said Tamil Nadu was determined to get its share of water from the Cauvery. There would have been a quietus to the issue had the Central government gazetted the final award of the Cauvery Water Disputes Tribunal delivered on February 5, 2007.

But, as it had not been done, all the four States involved in the dispute filed clarification petitions on the Award, and Tamil Nadu, Karnataka and Kerala had filed appeals before the Supreme Court as well.

The Chief Minister said she had taken up the issue of gazetting the final award with the Prime Minister time and again but in vain. “The Tamil Nadu government continues to press the Central government in this regard.”

Tamil Nadu’s stand was that the interim award of the Tribunal would continue to be in force until the final award was gazetted and the chairman of the Cauvery Monitoring Committee had also confirmed it on October 16, 2008. Similarly, the “irrigation year” as per the interim order, was June to January. The final award also subscribed to that.

Maintaining that agriculture would be affected in Tamil Nadu due to lack of supply of water from Cauvery river by Karnataka, DMK president M. Karunanidhi on Sunday appealed to the Centre to convene a meeting of the Cauvery River Water Authority to discuss the issue at the earliest.

Welcoming Tamil Nadu government’s move to file a petition in the Supreme Court to convene the meeting, Mr. Karunanidhi said in a statement in Chennai that “supply of 36.15 TMC of water, supposed to reach Mettur Dam in Tamil Nadu from Cauvery river till July 20, has not reached.”

In view of this, only a minimal amount of water could be released from the Mettur Dam from June 12 for three districts, he said. “45 per cent of irrigation in Tamil Nadu is being done using Cauvery water,” he said.

“Citing lack of monsoon rains, Karnataka is not supplying Cauvery water to Tamil Nadu and this may affect agriculture and economy of the state”, he said.

Recalling Chief Minister Jayalalithaa’s letter to Prime Minister Manmohan Singh in May demanding that the Centre convene a meeting of the CRWA, Mr. Karunanidhi said, “So far the Centre has not taken any steps to conduct the meeting.”

Ms. Jayalalithaa had written a letter to Dr. Singh on May 18 charging Karnataka with “unjustly utilising” the inter-state river water for summer irrigation from February to May by depleting storage in its four major reservoirs, affecting inflows into Tamil Nadu.

On Tamil Nadu Government filing a petition in the Supreme Court to convene the meeting, Mr. Karunanidhi said, “It is a welcome move”.