President advises construction not be carried within Sinharaja 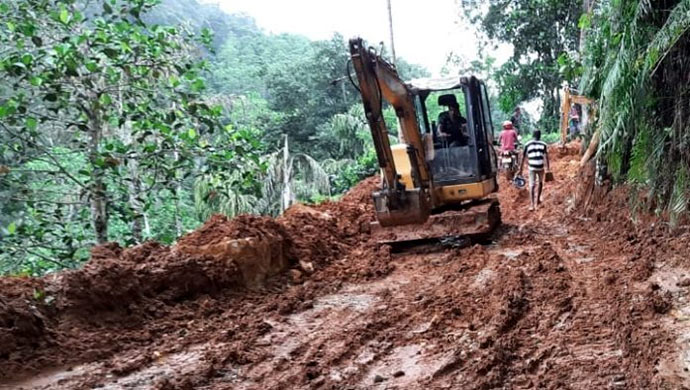 President Gotabaya Rajapaksa has instructed Highways Ministry officials to ensure that ongoing construction work along the Neluwa-Deniyaya road does not cause damages to the sensitive ecosystem of the Sinharaja rainforest.

Accordingly, Highways Ministry Secretary R.W.R. Premasiri in a communique issued yesterday evening clarifying the matter said that the construction work will proceed but a section of 1.1 kilometers which cuts across the sensitive area of the dense rainforest will not be carried out and a different path will be used for the road expansion work.

Environmentalists claim that the Neluwa-Deniyaya road expansion project which has been ongoing cuts across the Sinharaja and Ging Ganga reservation, two of the most sensitive ecosystems in Sinharaja. Over the last few days there had been growing criticism on social media over the road expansion project citing that the construction was a direct threat to the biodiversity of the forest and reservation.

Previously the Centre for Environmental and Nature Studies in Sri Lanka has raised its concern over the construction of this road in the buffer zone and inside the heritage site in a letter to UNESCO.

Home » President advises construction not be carried within Sinharaja