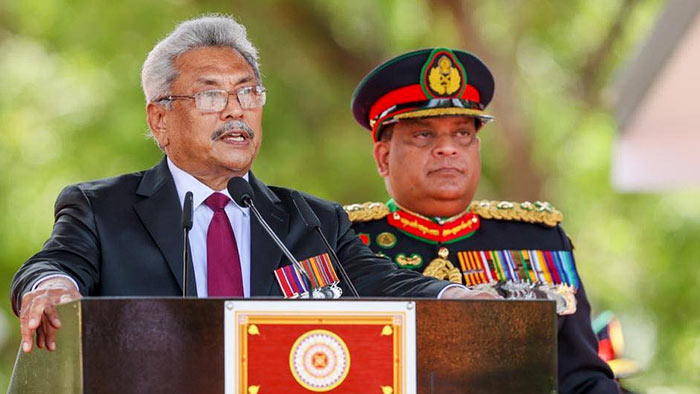 President Gotabaya Rajapaksa says that a Constitutional Amendment and a new electoral system will be introduced as promised to the people.

He made this observation while addressing an event to mark the Sri Lanka Army’s 72nd anniversary.

He requested all citizens of the country to assist the government to move forward in the correct path under one law, one country and devoid of corruption.

The President stated that although the country’s economy had slumped due to the Covid-19 pandemic, a great deal of work has been done for the people during the relevant period.

He emphasized that armies in the world are committed not only to war but also to nation building and expressed his immense gratitude to the tri-forces troops for assisting the health sector in quarantine and vaccination activities.

He said that over the past two years priority was given to national security by raising the mentality of the tri-forces and the intelligence services members and properly delegating official powers.

The President emphasized that he was committed to protecting the country in a manner that would not lead to terrorism or religious extremism activities once again.

Rajapaksa said that steps would be taken to amend the Constitution and to establish a new electoral system as promised to the people of the country.

He said corruption and fraud would not be tolerated and that all officials should work for the benefit of the people.

The army said it is indeed a landmark visit, not only as it was done by a Head of the State for the first time, but also because of his unforgettable intimacy and attachment that takes him down memory lane as a former warrior in the Sri Lanka Army, for that matter in the prestigious Gajaba Regiment (GR).

“His visit was historic, multifarious and has few firsts; he joins history as the GR-fostered first President of the country, the first President to join an Army Day and receive honours at Saliyapura, the first visit to the GR Headquarters after taking the mantle of Presidency in November 2019 and the first President to be accompanied to the location by the then Adjutant, now the incumbent Army Chief, groomed by the same prestigious GR itself when HE the President was commanding the 1 GR.”

President Rajapaksa as a member of the family of Keterians by gracing the Army Day on Sunday (10) once again reaffirmed his unfailing respect, devotion, appreciation and recognition he has towards the role of armed forces in the country and his continued confidence in the troops who strongly believe, ‘Nothing is Impossible’ for them, the Sri Lanka Army said.