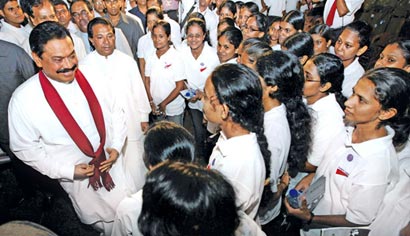 President Mahinda Rajapaksa noted that the Sri Lankan university education system would thrive in the future by producing global graduates who can positively contribute towards the country’s prosperity.

“We have clearly stated in the Mahinda Chinthana that our intention is to produce an educated person who could see the world beyond his own horizon,” he said.

“Our aim is also to produce a learned citizen who has gained physical and mental discipline coupled with positive attitudes and love for the country,” President Rajapaksa said.

He was speaking at the inauguration of the three week residential course of developing leadership abilities and positive thinking through the theoretical and practical training for new university entrants. Simultaneously, a three month non-residential pre-orientation course in English, IT and soft skills for new entrants to universities was also launched.

Addressing over 3,000 new university entrants at Temple Trees, President Rajapaksa noted that it was the government’s intention to upgrade higher education with new innovations to produce viable manpower which would be second to none.

The President impressed on the students the need to sharpen their skills, especially in the fields of English and IT.

Speaking on the other aspects of university education in Sri Lanka, the President said that there should be no room for violent activities within the education system any more.

He said that such violent activities in the past had only drawn the wrath and disgust of the people and had failed to deliver anything positive for the student population. Commenting on ragging of new entrants to universities, the President noted that this had taken on an abusive nature over the years. However the President said that such violent activities should be stopped not by oppression but by developing correct attitudes and healthy mental and physical discipline among students. On the same note, he said that the government had ended the era in which parents had to guard school gates fearing for the safety of their children.

President Rajapaksa added that the government had a responsibility to safeguard all students and would take appropriate measures in this regard.

Commenting on the residential course for new entrants, the President said that attempts to portray it as military training by some were utterly incorrect and added that the military was only providing the space and facilities.

He also noted that the Sri Lankan security forces were the most disciplined and patient forces in the world and told the students that they could take a leaf out of their book when it comes to developing discipline.

He also noted that the government fully understood the potential of the new entrants as only 23,000 gain entrance to universities from over 150,000 who face the Advanced Level examination.

He said that the government has pumped large sums of public funds to supplement the education system and told the students that they had a big responsibility on their shoulders to ensure that this does not go in vain.

He told them to fully utilize the facilities at their disposal in becoming productive citizens in the future.

2 Responses to President at launch of leadership training programme: Global grads our aim