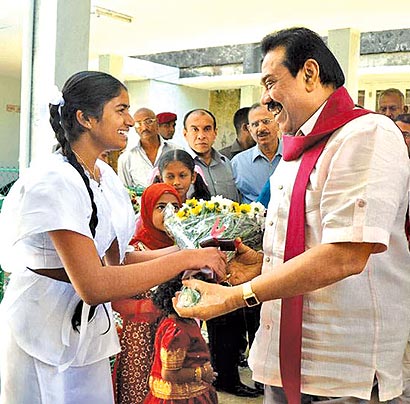 President Mahinda Rajapaksa yesterday said that the Government would take steps to provide subsidized fertilizer to all farmers.

“At present the Government provides subsidized fertilizer to paddy, rubber, coconut and tea growers. I have instructed officials to extend the facility to vegetable cultivators as well,” he said. He also noted that the Government would ensure that all farmers would be able to obtain subsidized fertilizer without any hassle. “They don’t have to fill forms or spend unnecessary time. Fertilizer would be available everywhere at the same price,” he added.

He also told the gathering that steps would be taken to do away with certain damaging methods used for tapping Kitul Trees for people to produce Kitul treacle and jaggery without hindrance. President Rajapaksa said that there were 2.8 million Kitul trees in the country, but only three per cent was being used to produce the above. However, he said that the facility should strictly be used to produce Kitul treacle and Jaggery only.

The President noted that the Government’s aim was to encourage local industries and strengthen agriculture to boost local economy and the income earning capacity of the people.

The President said that the Government’s one million domestic economic units program which would be launched on Saturday too would supplement the above.

Commenting on the future aims the President said that the present Government was not one to grope in the dark.

“We have very clear aims and targets and we have the determination and a plan to achieve them. We concluded the humanitarian mission successfully and brought freedom to those held in the grip of terrorism”, President Rajapaksa said.

“Our next target is development and prosperity. To up the living standards of the people we have to provide them quality infrastructure. We have a target to provide 100 percent electricity to all by 2012 and we would achieve it”, the President said.

“Today even in the remotest of areas carpeted and concrete roads are being built. We have provided better health facilities. Estate hospitals are now managed by the Government. Nowhere in the world has free education and health facilities been provided to the people in this way”, the President said.

“But we consider all these as an investment for the future. An investment to uplift the living standards of the people and develop the country. And ensure a better and prosperous future to the present and next generations” he said.

Commenting on the upcoming elections, the President observed that the Opposition was trying to create a wrong picture by telling the people that this was an election which can be used to topple the Government.

However the President pointed out that the upcoming polls was only to appoint representatives to the local bodies and not one which would change Governments.

The President said that the next Presidential election would be in 2017 and the Parliamentary polls in 2016. Even for a PC election there is nearly five years, he pointed out.

Commenting on the role of local authority members, he said that the Pradeshiya Sabha representatives would be involved in village development and it was their responsibility to work as an intermediary between the Government and the PS to obtain necessary resources and facilities for village development.

He said that what the people had to do was to choose the team which could best facilitate their needs and expectations. In this regard the UPFA has nominated a capable and willing team which can do the job, he added.

Addressing the candidates the President urged them to work as a team. He said it was their responsibility to bring victory to the ‘Betele Leaf’.